Abu Dhabi Ports, the master developer, operator and manager of the Emirate’s commercial ports and industrial zone, has won three prestigious awards at the 2016 Maritime Standard Awards of the Middle East and Subcontinent.

The company was recognised for its excellence in the maritime industry and was awarded the Deal of the Year Award for the recent agreement signed with COSCO Shipping Ports Lmtd.-Abu Dhabi, the Technology and Innovation Award in recognition of its port community system, Maqta Gateway, and the Maritime Standard Woman in Shipping Award which was given to Noura Rashed Al Dhaheri, Cruise Terminal Manager, for her valuable contributions and efforts in developing the cruise terminal at Zayed Port. 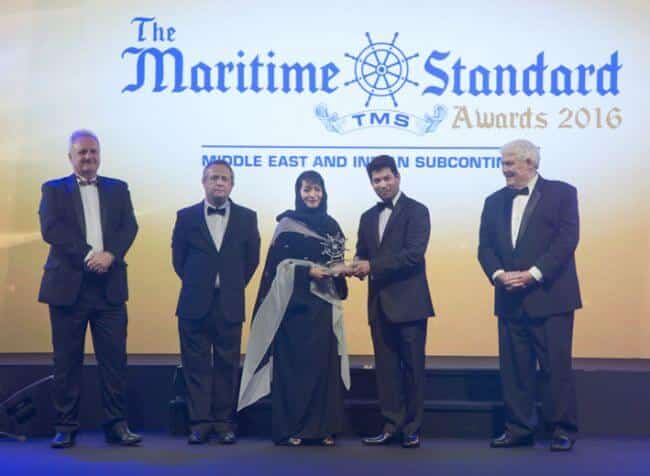 Representatives from Abu Dhabi Ports received the awards at the ceremony held at Atlantis The Palm in Dubai under the patronage of His Highness Sheikh Ahmed Bin Saeed Al Maktoum, Chairman of Dubai Airports; President of the Dubai Civil Aviation Authority; Chairman and CEO of Emirates Group.

Commenting on the occasion, Captain Al Shamisi said: “Winning three awards in the Maritime Standard Awards is testament to our continuous commitment to quality and achieving business excellence. We are proud to be playing a role in positioning Abu Dhabi as a leading maritime hub in the region and thus contribute to the Capital’s growing economy and economic diversification. I would like to thank the team at Abu Dhabi Ports for their dedication and all our stakeholders for their support and collaboration to ensure we reach our goals and objectives collectively,” he concluded.