ABS continued its long-standing backing of the Amver Awards by sponsoring a ceremony recognizing the contribution of Norwegian shipping to the unique reporting system supporting search and rescue efforts for those in distress at sea. 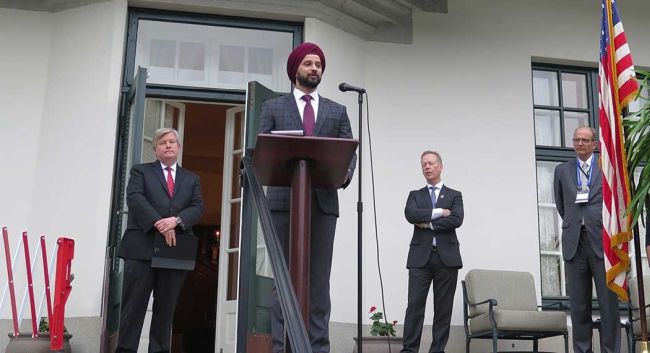 Hosted at the U.S. Ambassador’s Residence in Oslo, the ceremony saw 293 vessels from 33 Norwegian shipowners and operators honored for their commitment to maritime safety, making themselves available to assist in search and rescue activities anywhere in the world.

“The Amver awards are a fantastic way of recognizing the brave men and women who operate the global fleet and assist people in peril at sea. They also honor the companies whose culture puts safety at sea above commercial interests,” said Gurinder Singh, ABS Director Global Sustainability. “ABS is proud to support all of their efforts, which align closely with our own safety-focused mission.”

“As a former United States Naval Officer, I recognize how important it is that fellow seafarers look after each other on the open ocean. We all have loved ones who expect us to return home safely. Every Captain and every crew member finds comfort in knowing that there is nearby assistance in the event of an emergency. Mariners helping mariners is the most effective and the most appropriate insurance. The U.S. Coast Guard’s Amver Program is an invaluable example of international emergency and humanitarian cooperation for others to follow,” said Rear Admiral Kenneth J. Braithwaite, USN (Ret); U.S. Ambassador to the Kingdom of Norway.

Benjamin Strong, Amver Director, said: “Co-operation from Norwegian vessels is the foundation of Amver. Without vessels voluntarily participating in Amver, countless lives would be lost at sea. Norway’s commitment to Amver stretches back to Amver’s beginning. As places like the Arctic expand to shipping, we look to Norway to continue to support Amver by enrolling Ice Class vessels.”