The 85-meter structure is destined for assembly into a 1,550dwt state-of-the-art superyacht by one of the world’s premier yacht builders – specifically one of its naval-inspired and flagship series.

Whereas the lucky owner’s name has not been made public, yacht specifications could comprise a helicopter pad, 8 ensuite cabins across 5 decks, with further accommodation for approximately 21 crew and would comfortably reach speeds of up to 24 knots. 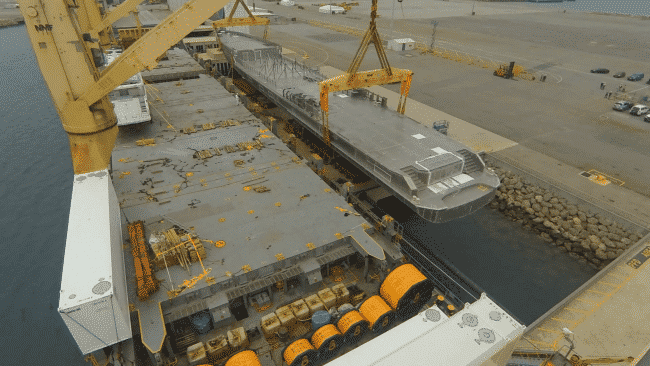 Utilizing the AAL Dampier’s 700t max lifting capacity and her 1,584sqm weather deck space – not to mention the carefully planned and executed loading, stowage, and discharge operation, delivered in partnership between the specialist crew of the AAL Dampier and the carrier’s world-class engineering team – AAL again showed why it’s the industry’s most awarded and trusted partner for the safe loading, transport, and delivery of high-value and high-spec cargo. The operation was completed on time, within budget and to the demanding specifications of the cargo stakeholders.