There were a total of 98 ships broken in the second quarter of 2020. Of these, 60 ships were sold to the beaches of South Asia, where, despite the majority of yards being closed due to the Covid-19 pandemic, shipbreaking kept putting workers’ lives at risk. Between April and June, at least 3 workers were severely injured in Bangladesh.

On April 24, Jalal (35) suffered an accident at Habib Steel shipbreaking yard. He got injured while carrying oxygen bottles from inside the ship.

According to local sources and media, worker Md. Khalil (45) got injured on April 28 at an unauthorized shipbreaking yard recently opened by lawmaker Didarul Alam. Khalil’s leg broke after a hatch cover fell on him while dismantling the vessel Berge Eiger, owned by shipping company Berge Bulk. The worker was transferred to the Dhaka Hospital due to the severity of the injury. 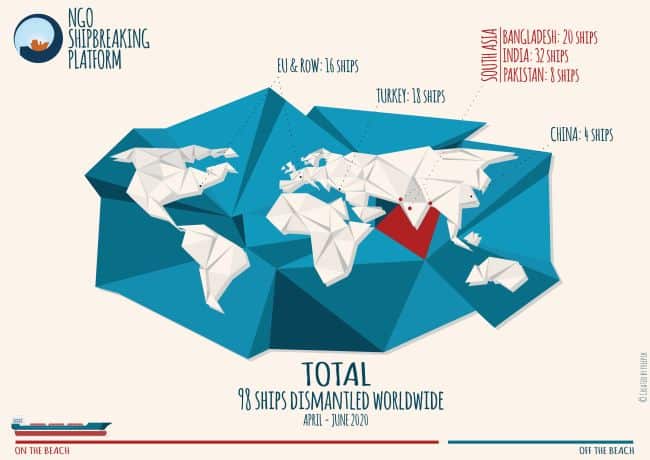 On June 22, an accident took place during an illegal night shift at Jumuna Ship Breakers yard. Abdul Halim (24) was hit by an iron piece in the stomach while cutting the vessel Stellar Knight, owned by South Korean Polaris Shipping. It took a couple of hours for the worker to be transported to the nearest hospital.

In the second quarter of 2020, Greek ship owners sold the most ships to South Asian yards, closely followed by Singaporean and South Korean owners. South Korean company Polaris Shipping sold three vessels to Bangladesh for dirty and dangerous breaking. The shipowner hit the headlines in June for the scuttling of the ore carrier STELLAR BANNER off the coast of Brazil.

In April, we urged Bangladesh to halt the import of a highly toxic offshore unit that had illegally deported from Indonesia. The Floating Storage and Offloading (FSO) tanker J. NAT left Indonesian waters even though local activists warned Indonesian authorities about the toxicity of the vessel. Following our actions and local media reports, the government of Bangladesh directed all departments concerned not to allow the ship to enter Bangladeshi territory. Maritime databases seem to indicate that the vessel reversed course and changed the name to RADIANT. However, its current whereabouts are unknown.

Almost one-third of the ships sold to South Asia this quarter changed flag to the registries of Comoros, Palau, and St. Kitts and Nevis just weeks before hitting the beach. These flags are not typically used during the operational life of ships and offer ‘last voyage registration’ discounts. They are particularly popular with the middlemen that purchase vessels cash from ship owners, and are grey- and black-listed due to their poor implementation of international maritime law. The high number of flag changes at end-of-life seriously compromises the effectiveness of legislation based on flag state jurisdiction only, such as the European Union (EU) Ship Recycling Regulation.

The pandemic is still affecting workers globally, including those employed in the shipbreaking sector in South Asia.

According to local sources, all shipbreaking yards resumed their activities on June 1. One-third of them never shut down despite the lockdown, exposing the workers to the risk of contracting the virus and spreading it in the vulnerable local communities.

Having been deprived of accessing government support, which is offered only to local workers, migrant workers have been unable to return to their home villages due to the absence of public transport services. Forced to continue to pay rent for the unsanitary and improper accommodation near the shipbreaking yards, migrant workers, mainly from the Northwest of Bangladesh, have been left to starve. This unprecedented emergency situation led us to raise financial support to distribute, in partnership with our member organization OSHE, food and personal protective equipment items to 130 of the most deprived shipbreaking workers’ families in Sitakunda.

After a month since the start of the national lockdown in India, the government announced the reopening of several industries in Gujarat. At the end of June, around 30% of the workforce was working at the shipbreaking yards in Alang. The fact that around 75% of the migrant workers returned to their home villages in Bihar, Odisha, Uttar Pradesh, and Maharashtra has led the yard owners to look at the diamond sector’s unemployed workers from Saurashtra.