November saw the final stages of a fine example of regeneration, with Niron Staal’s work on an old Amsterdam bridge. The 1930-built bridge was rolled out of Niron Staal’s premises and shipped on a pontoon from the adjacent Damen Shiprepair Amsterdam quayside to its new destination.

For this, the Gevlebrug, as the bridge is called, had to cross the River IJ which separates the north of Amsterdam from the rest of the Dutch capital.

The vertical lift bridge has served east of the Amsterdam Central Station until 2002 but had to be replaced as it couldn’t take the weight of the trams for the IJburg district. 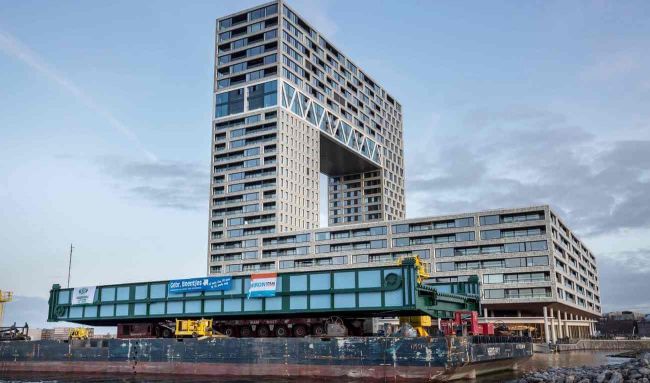 It was therefore subsequently deployed at the Noorderhoofd in Amsterdam’s port area. Following its thorough restoration, the characteristic bridge has now begun its new task in the opening up of Amsterdam’s new Houthaven residential area.

The restoration was carried out by Niron Staal Amsterdam BV and Messrs. Evenboer, both as commissioned by Gebr. Beentjes Grond-, Weg- en Waterbouw. The works were carried out in one of the four drydocks of Damen Shiprepair Amsterdam. “It is great that we still have the space in Amsterdam to carry out such large projects relatively close to the centre,” Tjeerd Schulting, director of both Niron Staal and Damen Shiprepair Amsterdam commented.

As Messrs. Evenboer was restoring the bridge in the drydock, Niron Staal manufactured three new bridge decks in its production hall.

Pleased to take up a riveted piece of nostalgia for a change, Niron Steel manufactured a 6 by 28-metre vehicle deck and two 3 by 28-metre pedestrian decks. After its completion in the drydock, the bridge – named after the Swedish Baltic port of Gävle, which used to important for Amsterdam’s wood trade – was transported to Niron’s production hall for the decks to be installed.

Once fully assembled, the restored bridge was rolled to the load-out quay of Damen Shiprepair Amsterdam by a platform of self-propelled modular trailers. Here, the bridge was moved onto a pontoon, to be shipped to the other side of the River IJ. After having been offloaded at the Houthaven location, the bridge has been installed in its final position by the platform of the modular trailer on November 8.