You are here: Home › Shipping News › 73 Out Of 122 Ships Broken On Beaches Of South Asia
TwitterFacebookLinkedInPinterestBuffer

There were a total of 122 ships broken in the third quarter of 2019. Of these, 73 ships were sold to the beaches of South Asia for dirty and dangerous breaking. Between July and September, eleven workers have lost their lives and twenty were severely injured when breaking ships in Bangladesh and India. So far this year, the Platform has recorded 19 deaths and 30 severe injuries in South Asia.

Cutter helper Mamun Hossen (35) was killed on 3 July when he was crushed by a falling steel plate at Tahsin Steel Corp shipbreaking yard in Chattogram, Bangladesh.

On 23 July, cutter man Shahidul (40) lost his life while working at Kabir Steel’s Khawja shipbreaking yard in Chattogram, Bangladesh. Shahidul was dismantling the container ship EVER UNION (IMO 9116618), owned by Taiwanese shipping giant Evergreen, when he fell from a great height. 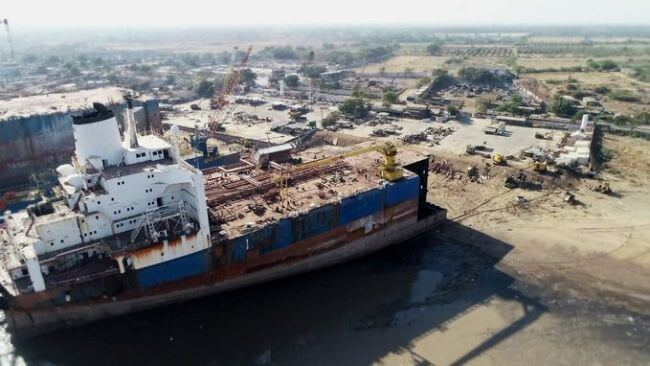 He died on the spot. Following the accident, the government imposed a three month ban on the import of end-of-life vessel on the yard, and has demanded that safety measures are taken. Already in 2018, Scandinavian investors withdrew their funds from Evergreen due to the company’s poor shipbreaking practices.

On 30 July, fitter men Nantu Hossen (24), Rasel Matabbor (25) and Chobidul (26) lost their lives due to a toxic gas leak on board the tanker MEDELIN ATLAS at Mak Corporation yard in Chattogram, Bangladesh. At least six other workers were severely injured. According to shipping databases, the vessel was sold for breaking by Indonesian ship owner Waruna Nusa Sentana.

During the scrapping of the Greek-owned container ship CSL VIRGINIA (IMO 9289568) at Ziri shipbreaking yard in Bangladesh, a heavy cable collapsed on 31 August, hitting several workers at once. Aminul Islam (35) and Tushar Chakma (27) lost their lives. Thirteen other workers suffered severe injuries and were taken to Chattogram Medical College Hospital for treatment. 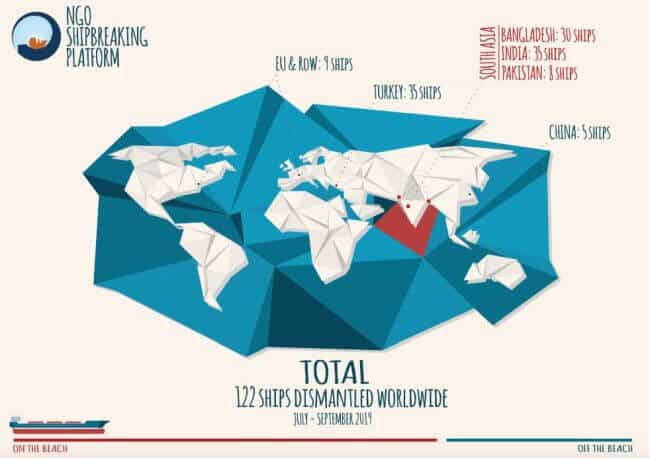 The circumstances of two additional fatalities at the shipbreaking yards in Chattogram this quarter still remain unclear.

According to Indian media, two workers died on the shipbreaking beach of Alang in the last quarter. Two separate accidents took place at scrapping yards that have applied to be included in the EU list of approved ship recycling facilities and are promoted by the industry as “safe and green”. On 29 July, Subash Vishwakarma lost his life when a metal plate fell on his head at Priya Blue yard – Plot V1. On 3 September, an explosion during cutting operations caused the death of one worker and severely injured another worker at Shree Ram’s yard Plot 78/81. In September, Dutch TV revealed the dire working conditions at a yard owned by Priya Blue, and the trafficking of false inventories of hazardous materials to hide high levels of mercury onboard offshore units.

In the third quarter of 2019, Japanese, American and Greek ship owners sold the most ships to South Asian yards, followed by Indonesian and South Korean owners.

Almost half of the ships sold to South Asia this quarter changed flag to the registries of Comoros, Gabon, Palau and St. Kitts and Nevis just weeks before hitting the beach. These flags are not typically used during the operational life of ships and offer ‘last voyage registration’ discounts. They are particularly popular with the middlemen that purchase vessels cash from ship owners, and are grey- and black-listed due to their poor implementation of international maritime law. The high number of flag changes at end-of-life seriously compromises the effectiveness of legislation based on flag state jurisdiction only, such as the EU Ship Recycling Regulation.

Criminal investigations have been launched by authorities in Europe following Platform alerts of imminent illegal exports of toxic end-of-life vessels. The case of the ferry SIR ROBERT BOND is, however, illustrative of the Canadian government’s lack of action. In the last two years, the ship was bought and sold several times: from the Canadian government to a peat moss producer in New Brunswick, to an agent in Quebec, who allegedly sold it for scrap to Indian breakers. In May, the Platform alerted competent authorities about the imminent illegal export of the vessel to South Asia from Canada. Despite authorities having been informed, the owner managed to illegally tow the unit to Alang, where it was beached a few weeks ago.

Even With The Pandemic, Ship Recycling Industry Isn’t Getting Any Rest