Officially named by Thurrock MP, Jackie Doyle-Price, London Titan will keep the river clear of obstructions and channels clearly marked for all to use. Titan has been specially built to be capable of working from Richmond in west London all the way out into the Thames estuary. Her work is vital on a river that is home to the UK’s second biggest port, busiest inland waterway for passengers and freight and a centre for sporting and recreational activity.

The PLA’s biggest single investment in over 20 years, London Titan was designed by naval architects MacDuff Ship Design, working with PLA marine engineers, masters and crews. She was built at Manor Marine’s shipyard in Portland, Dorset to Lloyd’s Register class. 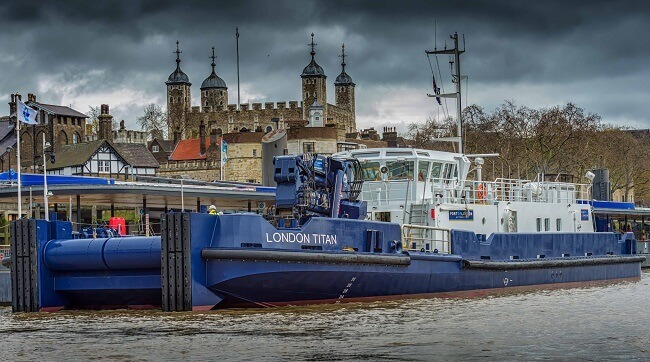 Shipping minister Robert Goodwill MP said: “Britain has a proud maritime history and this investment by the Port of London Authority will help ensure the sector continues to thrive. The government is doing everything possible to back this industry as part of its long-term economic plan to create jobs and growth.

“The River Thames is enjoyed by Londoners and visitors to the capital. The London Titan will help it continue to meet the needs of the growing number of businesses and passengers who rely on it all year round.”

Recent Thames investments include: two new MBNA Thames Clippers ferries, a new pier at Plantation Wharf, Battersea and an extension to Bankside pier. Downriver, developments continue at the Port of Tilbury’s London Distribution Park and at London Gateway Port, where a new third berth is being built.

Jackie Doyle-Price, Thurrock MP said: “The Thames plays a vital role in the Thurrock economy, so naming this boat, which keeps the river safe and open for business, is fantastic. Many people forget that the Thames is a major shipping channel. Thurrock is home to the major operations at the Port of Tilbury, Cobelfret and Vopak. In fact, more cargo is landed at the terminals in Thurrock than comes in via Felixstowe or Dover.

“The PLA investment in London Titan underpins operators’ confidence to invest, generating jobs and growth and underlines that fact that the Port of London remains a key part of the economic infrastructure of London and the South East.”

Robin Mortimer, PLA chief executive said: “This is a unique river which is busy and getting busier. Over the 95 miles of the Thames we look after, we’ve now got the world’s largest container ships calling, passenger trips reaching 10 million a year and inland waterways freight, like construction materials and rubbish, now at a steady five million tonnes a year.

“We’ve got to keep the Thames fit and ready for all these vessels and with over 40,000 jobs depending on the Thames, London Titan is a vital upgrade to our fleet. She brings power wedded to manoeuvrability, enabling us completely to modernise the way we work on the river on a reliable, efficient and safe working platform.”

London Titan has been specially designed to work along virtually all of the PLA’s 95 miles of the tidal Thames. She is squat and shallow enough to negotiate bridges as far upriver as Richmond, and robust enough to operate in the outer estuary. Titan’s duties include: mooring maintenance; laying and recovering navigation buoys; hauling wreckage from the riverbed; supporting diving and civil engineering operations; and plough dredging operations.