You are here: Home › Shipping News › 57% Rise In The Number Of Seafarers Affected By Piracy In West Africa
TwitterFacebookLinkedInPinterestBuffer

This 2016 study represents the seventh year that Oceans Beyond Piracy began the State of Maritime Piracy report series. Since the beginning of the series, the scope of the research has expanded to include analyses of the economic and human costs of piracy in the Western Indian Ocean Region, West Africa, Asia, and—for the first time this year—Latin America and the Caribbean.

Maritime piracy and armed robbery at sea impacts a wide range of stakeholders in a multitude of ways. OBP believes that it is possible to end violence at sea and that identifying and explaining the significance of these crimes is an important step in achieving this mission.

While spending towards at sea counter-piracy efforts has declined in recent years, very little funding has shifted towards building regional maritime security capacity.

Is it time to identify a maritime security deterrence threshold?

If international maritime security efforts are further reduced before more robust regional mechanisms are in place, it may create opportunities for piracy and other maritime crimes to continue unabated. 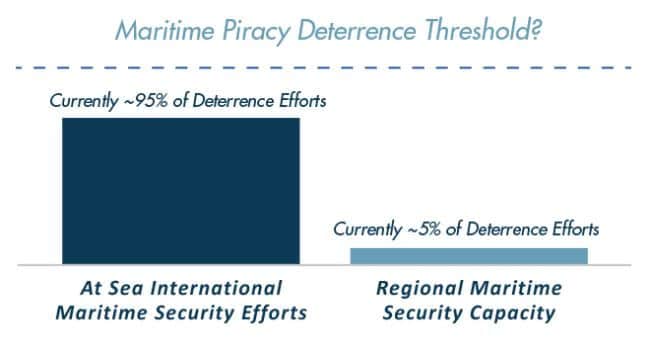 In 2016, the Western Indian Ocean continued to see limited piracy activity, largely due to at sea mitigation efforts over recent years. However, several attacks in early 2017 highlight the many gaps that still remain.

While incidents of piracy have been reduced, so has the international community’s commitment to a sustained effort to ensure that piracy does not re-emerge. Additionally, very little funding has shifted toward building the capacity of regional maritime forces.

Despite their limitations, regional maritime security entities have had some success in responding to piracy incidents. Supporting their efforts is essential for deterring maritime crimes off of the coast of Somalia.

Report: Lesson Learned In Combating Pirates Could Be Applied To Migration Crisis