The International Transport Workers’ Federation (ITF) estimates that there are now approximately 300,000 seafarers trapped working aboard ships due to the crew change crisis caused by government Covid-19 border and travel restrictions, and an equal number of unemployed seafarers waiting to join them who are ashore. That makes 600,000 seafarers affected by this crisis.

Today marks one month since the ITF told the world’s governments that ‘Enough is Enough’ and that the federation and its affiliates would be assisting the world’s seafarers in enforcing their right to stop working, get off and be repatriated to their homes and families, following completion of their contracts.

ITF General Secretary Stephen Cotton says in the month since July 15 there has been some positive movement, but too little progress has been made by governments to bring in the practical exemptions and protocols needed to support functioning crew changes across the world. 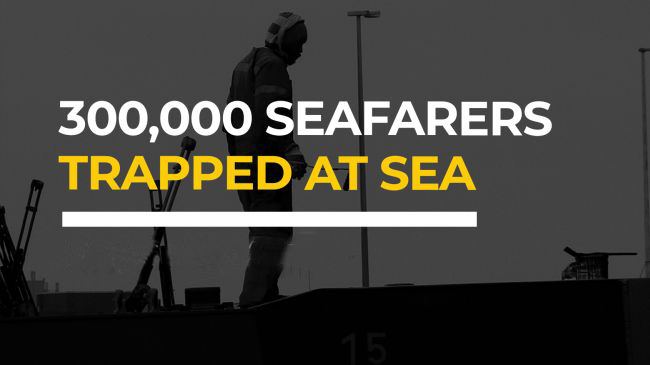 “300,000 seafarers are trapped working aboard these vessels another 300,000 are facing financial ruin at home, desperate to relieve these ships and start earning wages again. Governments are the biggest barrier to resolving the growing crew change crisis,” said Stephen Cotton.

“Governments must wake up and realise that without a return to successful crew changes; it is simply not sustainable or acceptable to have a growing number of tired and fatigued seafarers trapped working aboard the world’s ships endangering themselves, their vessels and our maritime environment,”

“Seafarers and their unions are deeply concerned about the risk to life, property and the environment as the chances of a major catastrophe or catastrophes rises daily. Government’s must act before we see more people die, or worse – a major maritime disaster. Urgent action is required,”

“We put a line in the sand last month to make it clear that the ITF and our affiliates are prepared to support seafarers in exercising their right to stop working, get off, and return home to their families, once their contract has finished and it is safe to do so. In the last month, we have provided advice and assisted thousands of seafarers on how they can enforce this fundamental right,” said Stephen Cotton.

Chair of the ITF Seafarers Section, Dave Heindel, said the ITF and its social partners have been doing everything possible to raise the alarm and push for the practical changes that would enable crew changes.

“We have worked together with our partners to find practical solutions and propose these to governments. We commend the governments which have brought in options for seafarers to disembark and be relieved by fresh crew, such as visas on arrival and visa waivers, but the sad fact is that globally governments aren’t doing near what is needed and some governments have even gone backwards,” said Dave Heindel.

“It is not acceptable that some countries have withdrawn shore leave for seafarers or began restricting the number of people allowed to enter their borders each day. Those countries that rely on maritime trade, like Australia and Russia – must start pulling their weight on this issue,”

“We have also made it clear that we and our affiliates would be following up on the 13 governments who made pledges this month at the International Maritime Virtual Summit on Crew Changes hosted by the United Kingdom. We plan to hold them to account and encourage others to join these progressive governments. This crisis requires all governments to develop a unified solution that takes serious the needs of the world’s seafarers. Governmental lip service is no longer an acceptable solution,”

“The ITF family will also be calling out any attempts to intimidate or blacklist seafarers for either exercising their human right to stop working and be repatriated once their contract has finished, and we will defend them from any attempts to blame them for the inevitable consequences of the worlds’ fleet operating with an increasingly tired, fatigued crew,

“We renew our call for governments to take action on visas, quarantining and flights to see a return towards functioning crew changes for this global workforce. We are prepared to explore other options to influence more governments to take this crisis seriously,” said Dave Heindel.