Cambodia has seized more than 3.2 tonnes of African ivory hidden in a storage container from Mozambique, a customs official has said.

The discovery of 1,026 tusks at the Phnom Penh Autonomous Port on Thursday followed a tip off from the US embassy.

The shipment arrived in the country last year and its unknown recipient did not arrive at the port to pick it up. 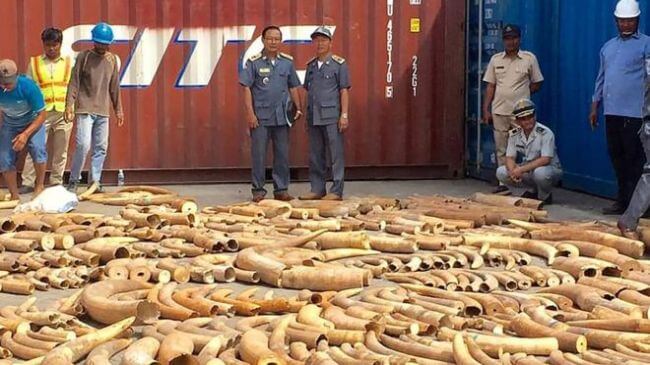 Demand from China and Vietnam has meant Cambodia has become a key transit point for the illicit wildlife trade. “The elephant tusks were hidden among marble in a container that was abandoned,” Sun Chhay, director of the Customs and Excise Office at the port, told the AFP news agency.

Sun Chhay said he did not know whether the shipment was intended for other countries. Cambodia has made a number of high-profile busts over the past five years. The largest before this week took place in 2014, when customs officials seized about three tonnes of ivory hidden in a container of beans at the southwestern port of Sihanoukville.

In April of this year, 3.5 tonnes bound for Cambodia were seized at Maputo Port, Mozambique, reports the Phnom Penh Post. In July 2017, authorities in Hong Kong said they had seized the world’s biggest ever haul of ivory tusks – some 7.2 tonnes.

Wildlife campaigners believe 30,000 African elephants are killed by poachers every year. The international trade in ivory was banned in 1990.