There were a total of 210 ships broken in the second quarter of 2017. 158 of these ships ended up on South Asian beaches for dirty and dangerous breaking [1]. The Platform was able to document five accidents at the shipbreaking yards in Chittagong, Bangladesh, between April and June, which led to the death of four workers and the injury of two.

Ishaq worked as a winch operator and died struck by a cable at the BBC Steel Shipbreaking/KR yard. This is the second fatal accident this year at BBC Steel. Zishan died in an accident at the Ratanpur Steel Re-Rolling mills where iron plates from the ships are transformed for the construction industry. In Jamuna Shipbreaking yard, the Platform reported in May about the death of Shahinoor who fell from the Hanjin Rome, the first ship arrested after the bankruptcy of the Korean container giant Hanjin Shipping. This ship was sold on auction by the Singaporean courts following the bankruptcy of Hanjin Shipping and should be a harrowing wake-up call to courts and bankruptcy administrators that there are human consequences of selling ships for the highest return price to the beaches. 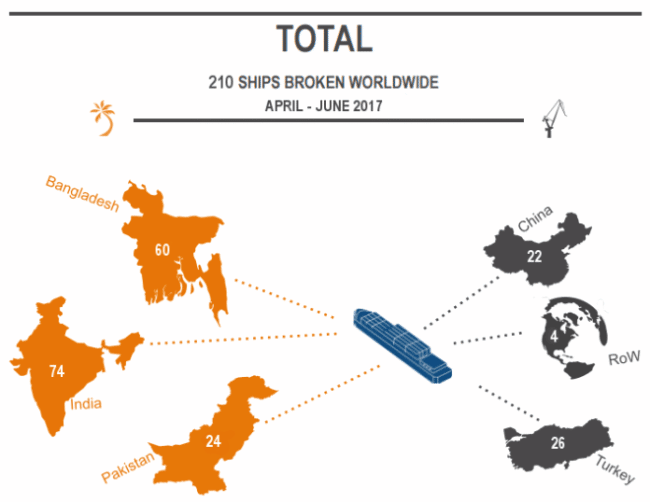 During a nightshift on 21 May, Shochindro Das died when he was hit by an iron pipe. He was working as a cutter helper in the Khawja yard, which shares owner with Kabir Steel. Working during night shift without protective equipment are particularly graving circumstances that sadly witness of the extremely harsh conditions workers face at the shipbreaking yards in Chittagong. Local sources are claiming that Shochindro Das was only 15 years old, whilst the officially reported age was 26. The Platform will investigate these serious allegations. Child labour at the Bangladesh shipbreaking yards is illegal under Bangladesh law and also under the ILO’s Convention on Worst Forms of Child Labour.

The worst dumping country this quarter was Germany with 16 beached ships, a consequence of the multiple bankruptcies due to the toxic financing that has been characteristic of the German shipping industry. In June, German public television channel ARD documented the appalling conditions under which German ships are broken in Bangladesh. The other leading dumping nations were Singapore with 12 ships, Greece with 9, and South Korea with 8. Though 45 out of the 158 beached vessels this quarter were European-controlled, only four of these had a European flag.

Legislation at the international and European level to regulate the disposal of ships is based on flag state jurisdiction. The flags of the worst dumping countries were however rarely or not used at end-of-life. Flags of convenience, in particular the grey- and black-listed ones under the Paris MOU, are used by cash buyers and ship owners to send ships to the worst breaking locations. Nearly a third (49) of all the ships sent to South Asia this quarter changed flag to typical end-of-life registries only weeks before hitting the beaches: St Kitts & Nevis, Comoros, Palau, Djibouti, Niue and Togo. These flags are not typically used during the operational life of ships and offer ‘last voyage registration’ discounts. They are grey and black-listed due to their poor implementation of international maritime law.

There were five cases where the ships in question were sent to South Asia in breach of the EU Waste Shipment Regulation [2]. In Bangladesh, the Platform was successful in taking legal action to halt the breaking of the FPSO North Sea Producer which was illegally exported from the UK in 2016. The Platform also alerted this quarter the Brazilian government of several vessels exported to the beaching yards from Brazil in clear breach of UNEP’s Basel Convention.

The worst company was the Singaporean Continental Shipping Line that had six Liberian-flagged vessels that all changed flag to St Kitts & Nevis or Comoros and were beached in South Asia. Quantum Pacific is a close runner-up on second place for worst dumping practices, with four ships sold to Pakistan and Bangladesh. Quantum, owned by Idan Ofer, son of the late shipping mogul Sammy Ofer, has been under the Platform’s radar before as the worst dumper of 2015. The worst dumper of 2016 was UK-based Zodiac Maritime, run by Idan’s brother, Eyal Ofer.

The figures of this quarter not only show how legislation based on flag state jurisdiction will fail in changing the deplorable shipbreaking practices of the shipping industry, they also show that companies such as Quantum and Zodiac have no shame in continuing to exploit vulnerable workers in South Asia for the sake of extra profits.

[1] During the second quarter 2017, the following number of vessels were broken in other locations: 26 in Turkey, 22 in China, and 4 in the rest of the world.