You are here: Home › Shipping News › 2 Extraordinary Acts of Kindness by Seafarers
TwitterFacebookLinkedInPinterestBuffer

Over the past couple of weeks there have been two acts of extraordinary kindness and humanity by seafarers serving on the high seas. The lives of seafarers are hidden from the world’s general public who largely are ignorant of the fact that seafarers are responsible for carrying 90% of the world’s trade. These two selfless deeds need to brought to the attention of a wider audience by the worldwide maritime community.

The first act was the rescuing of 540 people in the Mediterranean by the crew of the MT Bonita. Just over a week ago they saved 360 migrants at sea and showed them great hospitality. On Tuesday, 12th August, the crew again assisted in another rescue operation. This time they picked up 180 people from a boat that was adrift in the open sea. The men, women and children were Palestinians, Syrians and Iraqis fleeing from conflict in the region. This is not an isolated example as seafarers around the world often rescue people at sea. What was different was the number of people involved and that they were migrants. 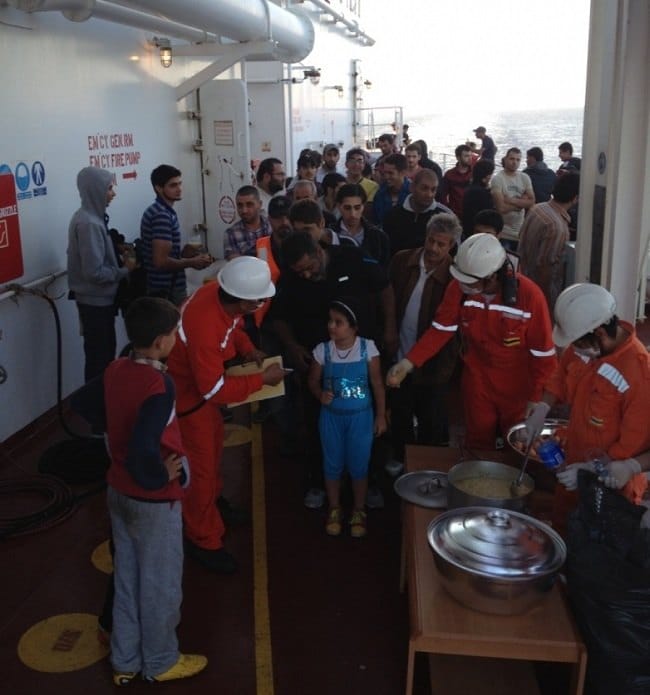 The second act was the collection organised by the master and crew of the MSC Vanessa for a seafarer who had been held for over three and half years by Somali pirates. An Indian Master, Capt Sukhvinder Bhamra, was sailing onboard when he received an email from Mr Abdul Gani Serang of the National Union of Seafarers of India (NUSI) on the hardships faced by Mr Aman Sharma, recently released from captivity after being held as part of the MV Albedo crew.

The Master and his crew started to collect money amongst the crew members of the ship. When he signed off, Capt Bhamra called Mr Sharma and informed him that he will try to collect about INR100,000 (USD1,650) from his ship’s crew and will help him in the coming days. Mr Sharma has since received the first of this support: INR30,000 (USD500). The Maritime Piracy Humanitarian Response Programme (MPHRP) continues to support the freed crew of the MV Albedo. We must not forget the thirty eight seafarers and fishers still being held by pirates in Somalia.

Seafarers have tough and, often, dangerous lives. We all owe them a debt of gratitude for their role in ensuring that we can all live our everyday lives with fuel, food, and cars.

Seafarers’ Relief Fund Reaches $530000 In Pledges Towards COVID-19 Seafarer Crisis
US, Netherlands And Other Nations Begin To Roll Out Vaccines To All Seafarers