The 18,000 TEU mega ship, the Marchen Maersk, has been officially named in a ceremony at the Port of Felixstowe, the Port of Britain.

One of the biggest container ships in the world, the Triple-E class vessel is operated by Maersk Line on its Asia-Europe service.

Commenting on the event, Clemence Cheng, Chief Executive Officer of the Port of Felixstowe and Managing Director of HPH Europe division, said:

“Maersk Line has a long-term relationship with the Port of Felixstowe and we are honoured that the naming ceremony was held here. The Marchen Maersk is the 17th maiden call we have had by one of Maersk’s Triple-E vessels this year. Maersk Line and HPH share a commitment to service excellence and, together, we offer UK importers and exporters the most competitive route to get goods to market.” 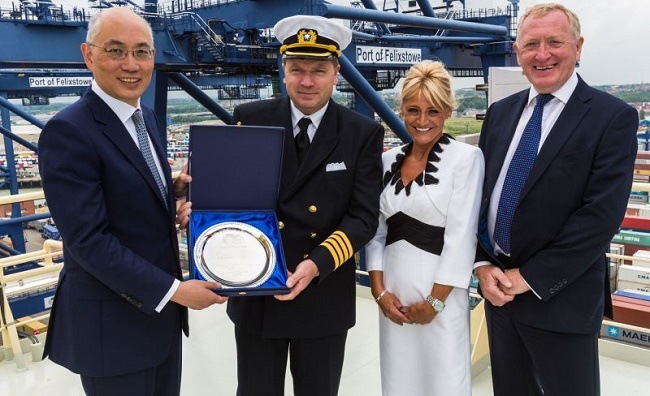 Brian Godsafe, Managing Director of Maersk Line UK & Ireland, said: “I’m delighted to host the naming ceremony of a Triple-E here in the UK, in the company of our customers and partners. The Triple-Es, with their efficiency, economies of scale and environmental benefits, are an embodiment of our business. It is fitting that some of our customers, the lifeblood of our business, are able to be a part of such an event at the Port of Felixstowe, which is a key partner in the services we offer.”

The Port of Felixstowe is firmly established as the UK’s port of choice for the latest generation of mega-vessels. The Marchen Maersk is the 46th ship of 18,000 TEU or more to call there so far this year.

The port’s ability to handle these huge vessels will be further enhanced when the Berth 9 extension is completed at the end of the year. The 190 metre extension will increase the length of Berths 8&9 to 920 metres and take the total berth length at the port to 3,900 metres.

Maersk Line’s Triple-E class set a new standard for vessel size on the Asia-Europe trade, the world’s largest, when they were first introduced in 2013. They are 399 metres long, have a beam of 59 metres and a maximum draught of 16 metres.