Eight weeks in limbo, without pay and facing starvation, far from home in the Bay of São Sebastião, Brazil, 14 seafarers from Ukraine and Montenegro are finally back with their families thanks to the ITF. And they’re home with US$261,009 backpay in hand.

In July, Renialdo de Freitas reported that, as ITF Inspector in Brazil, he had made contact with the crew and was working with government authorities to recover wages.

We can now share with you the inside story on the trials and tribulations of the crew of the Srakane. 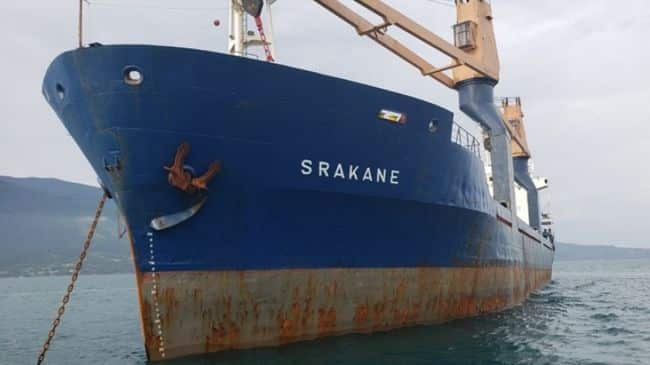 de Freitas first picked up an SOS from chief officer Nikita Pavlenko* onboard the Srakaneafter it arrived in Salvadore from Morocco in April.

de Freitas asked if the vessel had deficiencies so it could be detained in a Brazilian port under local laws and the Maritime Labour Convention. Pavlenko alerted him to problems with the crane, hatch covers and navigation bridge equipment.

The 34-year-old general cargo vessel had been stuck in Salvadore a month undergoing repairs and refuelling. Crew were anxious about supplies running low and money not reaching their families. Chief Officer Pavlenko was suffering migraines at the stress.

“My headaches are only increased every day. I constantly take pills,” he later wrote.

The Panamanian flag of convenience vessel next headed south.

“I have asked for urgent measures to provide food/provisions to the ship.”

When the Srakane arrived in the Port of São Sebastião on 1 June, De Freitas drove four hours down to meet the crew.

Pavlenko says the captain threatened them not to say anything. The captain blamed the crew for calling the authorities.

The master was one of only two Croatians on board the ship, which is named after an island in Croatia’s Adriatic sea and owned by a Croatian company.

“I’m told they had a bit of a fight and Pavlenko locked himself in his cabin,” said de Freitas.

The ITF Inspector advised the crew to stay calm in the face of any further provocation or harassment, and not leave the vessel before their wages were paid.

“Otherwise all of you could lose everything,” he wrote.

The crew made it clear they would take a stand.

“We are already tired of this mockery of our families,” one crew member wrote. “Many of our relatives require medicinal attention and we cannot even provide for our children.”

“Who else should we inform that our rights are violated, not only as sailors, but also as people,” he added, calling on the President of Ukraine for help.

Brazil has been a signatory to the Maritime Labour Convention (MLC) since November 2019, and government authorities decided that on this occasion it was important to enforce it.

The Brazilian Navy helped resupply the vessel. A task force made up of officials from the ministries of Labour, Justice, Social Security, federal police and the Navy was put together.

The owners representative was given a deadline of 16 June. When that date passed, the ship was detained as a guarantee of the wages and other monies owed.

de Freitas then worked with the government prosecutor by video conference to help mount the case against the ship’s owners, managers and charterers.

The ITF was preparing to claim abandonment, abuse and poor vessel maintenance under the MLC.

After finding the men on board had gone without their salaries for between four and 11 months, Brazilian Labour inspector Claudio Tarifa reported serious violations of human and labour rights to the Ukraine Consulate General. She said some crew members had not even received their pay owed from previous contracts.

Back in the homeland of the majority of the seafarers of the Svkrane, the ITF was also making noise. ITF Inspector Nataliya Yefrimenko spoke out:

“Their employer is breaking their obligations, and that will be having a large impact on families back home who rely on those wages.”

The ship’s operator, Oceans Wide Ltd, and the employer pleaded financial difficulties due to the Covid-19 crisis.

While the pandemic has had a large impact on the global seafaring workforce and some shipping routes, most cargo has continued to move. The crew change crisis is affecting seafarers unable to join and leave ships – but it has not yet affected shipping companies or the supply of goods. In any case, the crew of the Srakane had gone unpaid for months before the pandemic hit.

de Freitas said the ITF was wary of letting employers ‘off the hook’ for cheating crew of their wages due to Covid-19. Under the MLC, if a ship’s owner cannot pay, then other parties including charterers can become liable.

The Brazilian authorities worked tirelessly to find a solution to get the foreign crew of the Srakane home, and paid their wages.

Then, on July 4, came a breakthrough. A local businessman, João Carlos Camisa Nova Junior, of agribusiness CBA Exportação de Produtos Agrícolas Ltd, agreed to sub-charter Seachois Ltd for the Srakane to ship soyabeans to Europe. This raised US$300,000 up front and was more than enough to settle the crew’s wages and repatriation costs.

Both he and charterer Seachios signed a Conduct Adjustment Terms – CBA signing as guarantor. Seachois then arranged to employ a local Brazilian crew to take over the Srakane, enabling a crew change to go ahead abd the Ukrainian and Montenegrin crew then able to fly home.

After repairs were made the vessel was released from detention. The Srakane was back in business ready to ship goods from Port of São Sebastião across the Atlantic to Europe.

As well as receiving all wages owning, each seafarer was provided their airfares, transfers, medical care, accommodation and meals for the journey. They also each received US$400 for any out-of-pocket costs on the journey.

Three crew suffering stress were the first returned home on July 18, alongside a cadet from Montenegro. The final 12 remaining seafarers followed on on 26 July and 30 July.

The second officer and captain of the Srakane are expected to disembark after the ship arrives in the next port.

Upon arriving in the Ukraine chief officer Pavlenko wrote to ITF inspector de Freitas back in Brazil: “Thank you very much for your huge efforts and titanic work…All crew received money.”

The men of the Srakane were home. And paid.