Designed by Denis Oudendijk, a Dutch designer, the Capsule Hotel has been created solely out of pods used in the high seas’ oilrigs as an escape outlet. Based on the success enjoyed by the few capsule hotels that have been put to use near Den Haag, the designer has been working on a few more such capsules and a bigger capsule vessel that would aid him better whilst carrying out further researching for discarded materials.

These vessels also form a primary post for many such creations developed from discarded materials, referred to as ‘floating communities.’

According to the designer, the capsule hotel will help to combat three major problem-inducing areas – space, waste resources and under-utilisation of water as a living medium – inconveniencing the country of Netherlands. 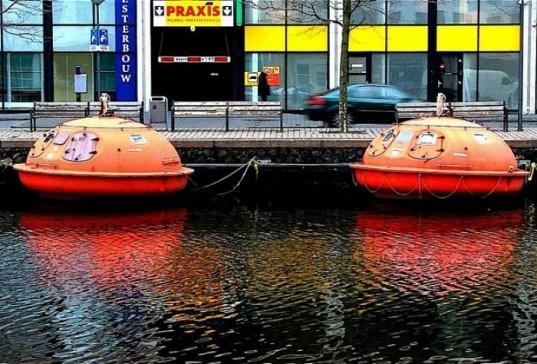 In a bid to find out the most viable materials that would meet all the three aforesaid requirements, the designer spent touring major water areas in the whole of Europe before finally narrowing down on these oilrig discards.

Also considering that they are self-contained, it negates the requirement of setting a roof before people can start using the capsules. 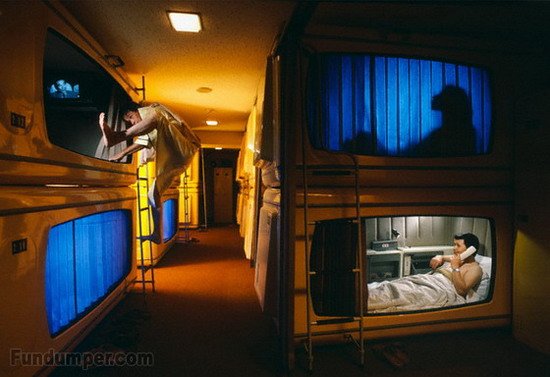 60 Euros for a single night’s stay is the rate charged for utilising the hotel’s intriguing confines. While at first, this might appear to be on the costlier side, considering the ingenuity of the contraption, paying such a fee does not look far-fetched at all.

This capsule vessel is showcased by REFUNC – a marketing arena for those products whose’ designing and production has originated from waste resources.

Denis Oudendijk is one of the leading propagators of this forum along with other fellow designers who believe and come up ingenious creations from waste and discarded materials. 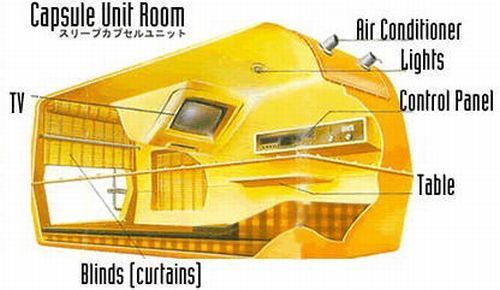 The designers at REFUNC are constantly on their toes trying to delve into the intricacies of the wasteland world. Post encountering any such waste materials that could be further re-furnished, these designers make use of modern technological infrastructure to mould the waste into finessed creations.

Easily contactable, Denis Oudendijk is at present based in Netherlands where interested people can approach him and find out for themselves about the unique creating options incorporated by him and REFUNC.

A Sunk-in Bridge that Parts Water Perfectly
Want to share your tips and advice? Got questions? Visit the community forum to ask questions, get answers, meet people, and share your tips!