If there is anything that can make miracles happen today is science and architecture. A unique design constructed by RO & AD Architects allows people to literally walk ‘amidst’ water, across a moat, which is supposed to be inaccessible, through an interesting sunk-in bridge.

The company achieved this interesting feat by constructing a sunk-in bridge that runs across the moat to a 17th century Dutch fort. The bridge is made from Accoya wood, a sustainable hardwood that has been Cradle to Cradle Gold certified, besides being certified from FSC and PEFC. This wood was apparently best choice for construction of this unique bridge owing to its properties to sustain in submerged condition. A further non toxic coating on the wood provides it greater protection against fungal attack, extending its life and utility. The bridge has been built to run across the width of moat, descending and ascending the abutting sloping walls with staircase that also runs ‘submerged’ in the mass of earth surrounding them.

Moat can be easily crossed through this bridge, while walking in middle of water. The construction of bridge is so designed that it would literally take anyone by surprise. The surrounding water which is always at level with the bridge and the foliage makes the bridge virtually undetectable from a distance. 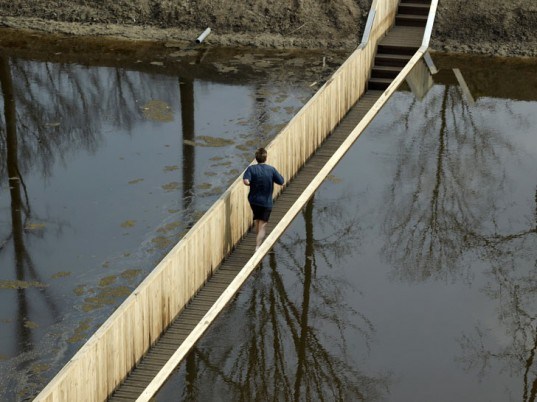 Interestingly, this architectural marvel has the credit of making the Dutch fort accessible for the first time since its construction in 17th century. The Fort de Roovere was constructed in Netherlands in 17th century on the West Barbant Water Line so as to make the area inaccessible to approaching French. This, they managed with the help of the moat that was too shallow for boats and too deep to be crossed on foot. However, this bridge has now allowed the rest of the world to experience the beauty of the ancient fort by allowing people to reach it, in its own unique way.

The bridge offers a dual exploring experience for its visitors- the fort it leads to and the path itself. It was awarded with the BNA (Union of Dutch Architects) Building of the Year 2011, southern Region.