Offshore wind turbines have been criticized for quite some time now for the low efficiency that they deliver. One main drawback behind this problem is that some of the power generated by the wind turbine is often lost while feeding the power into the grid, for this has to be done right when the blades are spinning. However, a new offshore turbine system – SeaTwirl is designed to kinetically and efficiently store the energy generated.

The SeaTwirl system is a massive flywheel at the sea. The structure consists of a vertical wind turbine with a hollow torus ring at the bottom. This arrangement is located above the surface of the water; rest all lies below the sea water level.

The whole structure is supported by an axle at the centre of the turbine. A hollow cylindrical body float body is mounted on this axle and is also connected to a generator. As the wind blows, the turbine along with the axle rotates. 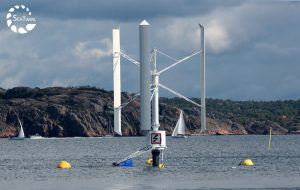 Water acts as low-friction roller bearing and allows the turbine and axle to rotate even when the wind stops. The wind energy is converted into power by the generator and can be transferred to the shore via seabed cables.

The torus ring plays an important role to provide the required momentum even when the wind stops. During high wind, water is drawn up the float, into the torus ring. This adds weight around the periphery of the circular turbine and increases the centrifugal force, keeping the spinning for a longer time. When the turbine slows down, the water runs back down the float.

A prototype (one-fifth scale) of the SeaTwirl was tested off the coast of Sweden and has been reported to produce favourable results. According to the reports, it is expected that a 430 meter SeaTwirl will be able to produce 4.5 megawatts of mean power. Moreover, as much of the weight of the system will be supported by sea power, the production cost is expected to be lower than that of conventional offshore wind turbines.