Has your sea freight consignment been delayed because you did not receive the original bill of lading for clearance from the shipper on time? Was the original misplaced? Did you have to go through numerous phone calls and moments of anxiety to get the originals sent to you by the shipper or consignor?

Well, if you answered YES to any of these questions, then a telex release is the answer to these issues.

Company A in Dubai, United Arab Emirates sends a consignment of spare parts to company B in Bahrain. The voyage takes one day between Jebel Ali, UAE and Port Khalifa Bin Salman, Bahrain. For urgent delivery to one of its customers, company B wants to clear this consignment immediately on arrival.

Preparation, printing, and authorization of shipping documents will take half a day. The fastest courier company from Dubai takes a day for delivery to the customer’s office.

It would therefore take a minimum of one and a half days to reach the customer’s hand. There is no way that company B can get the clearance process going before getting all the documents on hand.

In this case, company A can surrender the original bill of lading (along with the copies) to the shipping company and request it to issue a telex release.

When a telex release is issued, the original bill of lading is not required to clear the cargo in Bahrain. The shipping company in Dubai would instruct its branch or agent in Bahrain to release the cargo on arrival to company B.

As soon as the telex release is issued, company B can get the process of clearance rolling and thus, it helps it to clear the goods as soon as the vessel reaches Bahrain. Company B should also have ensured that all other clearance documents are received from the shipper.

What is a Telex Release?

In a nutshell, it is the electronic communication from the ocean carrier’s office at the port of origin to their counterpart at the port of destination confirming that the original non-negotiable bill of lading has been surrendered to them by the seller or consignor and therefore the consignment mentioned in the bill can be released to the customer or consignee without the original. 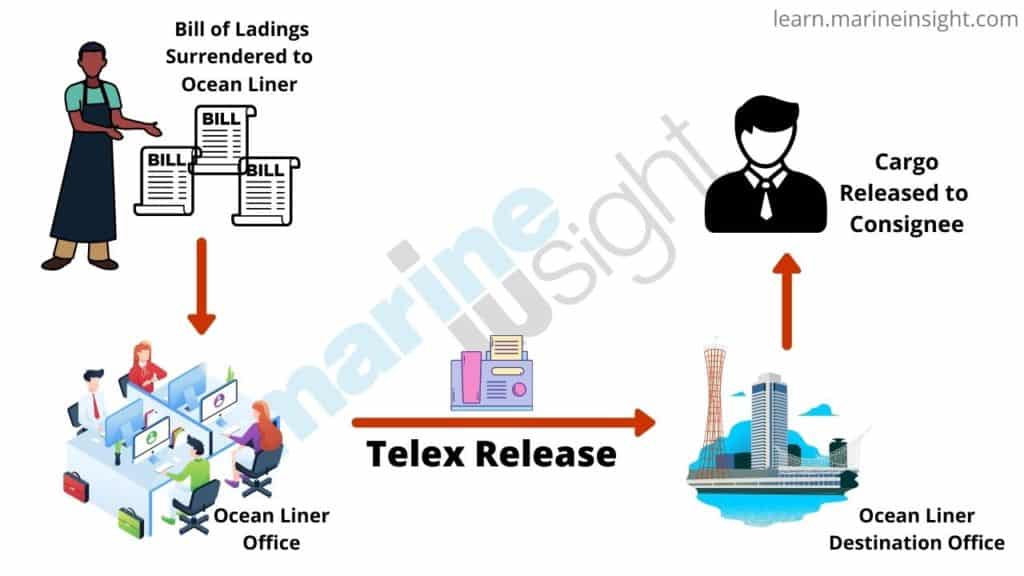 Why it is Called Telex Release?

Telex is a message transfer service that was started in 1926 and was common especially during the period prior to the year 2000.

One had to subscribe for the service with the telex service provider. It enabled telex users to exchange text data and text messages.

It required teleprinters that were networked to receive and print these messages. Telex lost its prominence as email became a popular form of communication during the latter half of the 1900s.

An interesting fact here is that even though these days the message that goes from the carrier’s office to its branch at the destination to release the cargo, is normally by email or other similar electronic means, to this day it is still known as a telex release!

In this case, all notify parties will be informed of the telex release. This helps them to make arrangements for clearance and transfer of the cargo as soon as it is offloaded from the vessel.

Carriage of Goods by Sea Acts

Why is so much emphasis placed on the original documents?

This is because the bill of lading is a legal document. It is a document of title to goods as well as a contract of carriage under various Carriage of Goods by Sea Acts of many countries.

In the United States, it comes under the Carriage of Goods by Sea Act (COGSA), which is a slight modification of the Hague Rules of 1924. 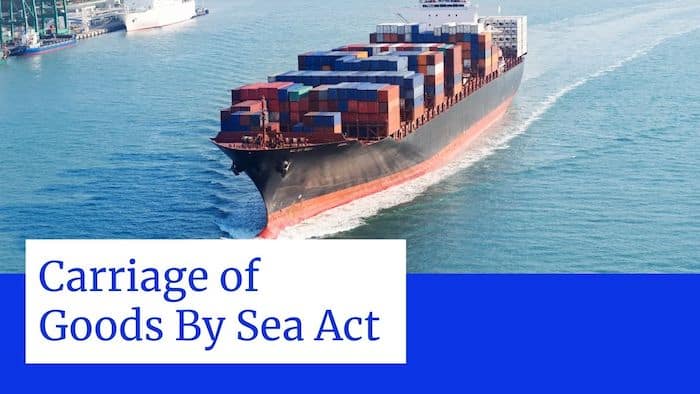 Originally set up as rules to govern bills of lading and their signatories, the Hague Rules were modified subsequently. These were a set of rules that set a minimum standard for the carriage of goods by sea.

In India, bills of lading are covered under The Indian Carriage of Goods by Sea Act of 1925.

A person or party whose name appears under the consignee field on the bill of lading is the rightful owner of the goods.

Upon presentation of the bill of lading to the shipping company’s office at the destination, this party can take possession of the goods.

A telex release facilitates clearance of goods without the original non-negotiable bill of lading being presented at the destination.

Seaway bills cannot be transferred to any other party and the cargo mentioned in it will be delivered by the carrier only to the consignee whose name is mentioned on the seaway bill.

Liberal global trade policies have encouraged the movement of cargo between countries. This, in turn, has led to the development of several supplementary activities to cargo shipping such as inland transport, clearing and forwarding agencies, warehouses and logistics facilities, etc.

A typical trading scenario is given below.

When the agreement to trade in specific goods is entered into between the seller and buyer, it sets off a chain of events. Starting with making arrangements for payment and all other activities connected with arranging carriage to the clearance and receipt of cargo at the buyer’s end, it is a complex process that requires specialized knowledge of trading, transport, customs clearance, warehousing, and logistics.

Each field will have its experts. These activities will have to be coordinated and executed precisely for the successful clearance of the cargo. This chain of events culminates in the clearance of cargo and its delivery to the customer.

Facilities that ease such complex procedures such as telex release, express release, etc. help the clearing agent or consignee in the timely clearance and receipt of goods.

A seaway bill is a non-negotiable instrument and the ocean carrier is bound to deliver the goods only to the consignee mentioned in the seaway bill. 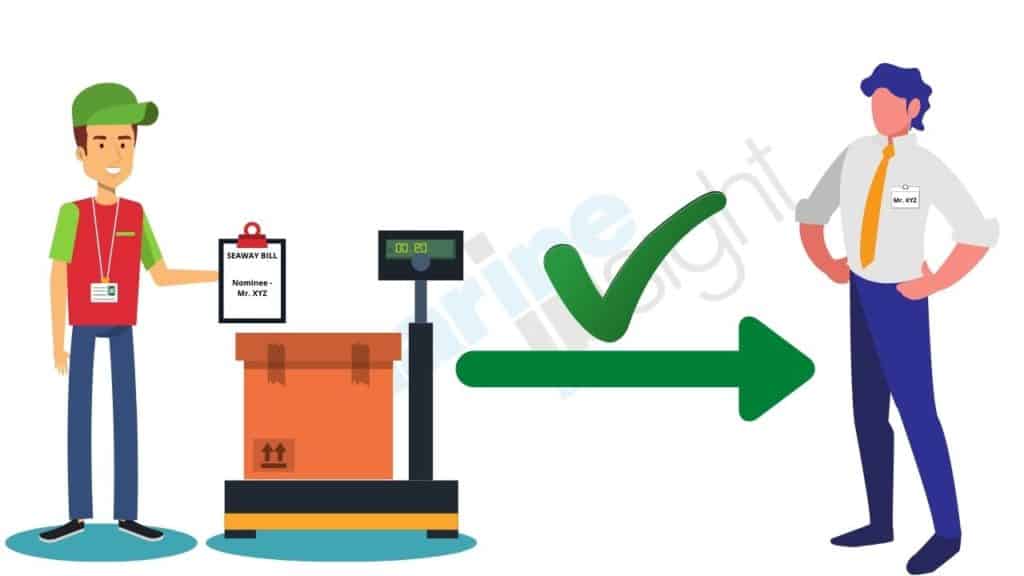 Can goods be cleared without the original seaway bill?

Yes, a telex release or an express release is the answer to this question.

An express release is very similar to the telex release except that a set of original seaway bill of lading (hard copies) is not printed by the ocean carrier.

As in telex release, the express release is also a communication from the carrier’s office at the port of origin to their counterpart at the destination port instructing it to release the cargo to the consignee.

With a telex release, the consignee or its appointed clearing agent can take delivery of the shipment without having to present the original bill of lading.

Usually, the notify party or clearing agent shown on the bill of lading gets all the information that it needs for clearance of the consignment from the carrier’s agent.

Once the consignment reaches the destination port, the clearing party picks up the cargo after providing the necessary credentials and documents, and payment of all required dues to the carrier.

The normal practice among ocean carriers is to insist that all copies of the bill of lading are surrendered to them by the shipper to affect a telex release.

The term express release relates especially to seaway bills and is very similar to the telex release. When one party sends a cargo consignment to its branch at another location and there is no involvement or need of any financial organization to guarantee payment, etc. they may request the carrier for an express release.

Just like the telex release, an express release could be to meet an emergency where the consignee has to get his consignment cleared and delivered urgently. It avoids printing of the original documents, collation with other papers, and dispatch to the consignee, which may all be time-consuming especially in a busy office.

An ocean carrier may also issue an express release to a trusted freight forwarder or NVOCC (Non-Vessel Operating Common Carrier) who will then issue their house bill of lading (HBL) to the customer.

Can a Telex Release be Amended?

As we saw at the beginning of this article, a telex release is issued by the ocean carrier to its destination office only after receipt of the original hard-copies of the bill of lading from the shipper. Hence all the details in it are as already confirmed by the shipper.

Can it still be amended?

In some cases, if the cargo is on its way and has still not reached its destination, certain instructions in the telex release may be changed by the shipper, with the customer’s written permission.

The shipper will have to make a request for an amendment to the ocean carrier’s office and for a fee they will do the amendment.

Amendment of shipping bills is a time-consuming process and requires time, effort, and money.

Telex release saves time and money. As soon as the originals are surrendered and dues if any, paid, the message to release the cargo to the consignee goes out from the carrier’s office. While being instantaneous, the cost of courier service to send the documents, and printing stationery is also avoided.

The original bill of lading is a contract of carriage and proof of ownership of the cargo. It gives control to all the concerned parties be it the carrier, the consignor, the consignee, the beneficiary, or even the clearing agent.

However, if the instructions contained in the telex release for the release of cargo are not conveyed accurately, it can result in confusion.

Language barriers or ambiguity in wording the release may result in serious consequences such as releasing the cargo to the wrong party, not collecting the prescribed fees, etc.

Online fraud involving fake telex release messages is something that all parties will have to be careful about. Since it takes only an email to convey a telex release, fraudsters often resort to manipulating or completely forging such email messages.

Telex release messages should always be scrutinized by the receiving office and the validity of such messages confirmed with the sender. It is a good practice to confirm the telex release that is received, with the office that has sent it, before accepting it.

In recent years, ocean carriers have increased online security and introduced better procedures to prevent online fraud. Most cargo that is shipped onboard carriers are of high-value.

Online fraud can be prevented to a large extent by the use of e-commerce fraud protection software.

Software that uses AI (artificial intelligence) to pick out online fraud and user authentication technology that identifies a valid user is widely used by shipping as well as trading companies these days to counter online fraud such as fake telex messages.