Last Friday on April 4, 2014, IMO MEPC on its 66th session, agreed on stricter requirements for vessels’ NOx emissions in specific areas, the so called NECAs. During this session the entry into force date of these requirements has been also agreed, although until the final MEPC decision, there was a disagreement for this matter from a number of countries headed by Russia.

The main argument from Russia’s side was that due to important technical barriers on the technologies available for NOx emissions reduction, the entry into force date for regulations on ships’ NOx emissions was unrealistic/“not properly founded”. Therefore, according to Russia, postponing the entry into force date at least until 1 January 2021 was the most appropriate decision.

On the other side, countries such as the United States, Canada, Denmark, Japan etc argued that current technologies for NOx emissions reduction are either proven to work or will be fully functional until 2016. Special reference was made to Selective Catalytic Reduction (SCR) which is considered a commercially available technology and the most common way in which the Tier III NOx limits are to be met. 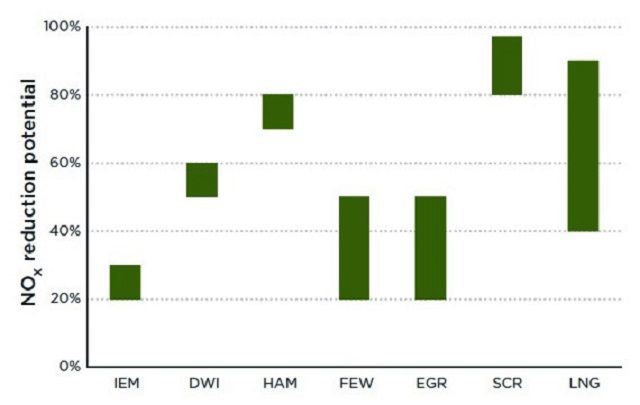 Russia’s argument goes back to last year’s MEPC 65 where comments (MEPC 65/4/27) on the report with title “Assessment of Technological Developments to Implement Tier III NOx Emission Standards under MARPOL Annex VI” were submitted by Russia, stating that in order to consider a NOx emissions reduction technology as sufficient and internationally acceptable, the following three criteria should be met:

Nitrogen Oxides Neutralization and Prevention of other Regulated Harmful Substances

According to Russia, one drawback of SCR technology is the risk of ammonia appearing in the exhaust system when the engine is working in variable loads, keeping in mind that the SCR system is generally considered reliable within temperature range between 250 and 400°С. This “drawback” does not stand up if it is given a closer look, taking also into consideration well placed comments (MEPC 66/6/6) made a few months ago by United States, Canada, Denmark etc., on the approval at MEPC 65 of amendments regarding the effective date of the NOx Tier III standards.

This is mainly because the SCR system, by design, makes use of controllers which limit ammonia slip through monitoring of the NOx concentration at the downstream end of the SCR catalyst. This controller regulates, in real time, urea dosing and therefore keeps the molar ratio of ammonia to NOx to not exceed 1.0 (keeping ammonia slip below 10 ppm). Apart from this the exhaust gas temperature for 4-stroke engines, after the turbocharger turbine, ranges from 300°C to 400°C, which is a sufficient temperature range to obtain the necessary energy to enable SCR reaction even downstream of the turbocharger. This is similar for 2-stroke engines as well, because their typical exhaust gas temperature is 300 to 400°C before the turbocharger, and a little cooler after the turbocharger and so various solutions for this type of engine includes installing the SCR system before the turbocharger turbine, or reducing the level of charge air, or modifying the injection timing etc.

Moreover Russia argued that where NOx is neutralized with urea, CO2 emissions increase in quantities relevant to those of the neutralized NOx. This is partially true because by referring to relevant calculations of CO2 emissions resulting from NOx neutralization with urea, one can easily identify that the amount of CO2 that is being produced is either negligible or not worth giving attention. In order to be more specific, reference is being made below to the example given from the comments made a few months ago by United States, Canada, Denmark (MEPC 66/6/6).

The emission limit of NOx from a 2-stroke slow speed engine is used, 14.4 g/kWh calculated as total cycle composite weighted emission of NO2. IMO NOx Tier III limit is 3.4 g/kWh, therefore for the engine to be compliant the NOx must be reduced by 11 g/kWh. This translates to 0.24 moles of NOx, 11 g ÷ 46 g/mole = 0.24 moles and so 5.3 g/kWh of CO2 is generated. The CO2 emissions from the engine itself are 596.7g/kWh (based on 2012 Guidelines on the method of calculation of the attained EEDI, SCF is 190 g/kWh and CO2 emissions per 1 tonne of LFO is 3.151 tonnes ). Comparing 5.3 g/kWh to 596.7g/kWh is easily identified that the SCR’s contribution to the total CO2 emissions is less than 1%. Not to mention that the increase in CO2 emissions occurs only when the system operates within an ECA and it can be further reduced by means of optimization of the fuel injection timing to maximize fuel efficiency. 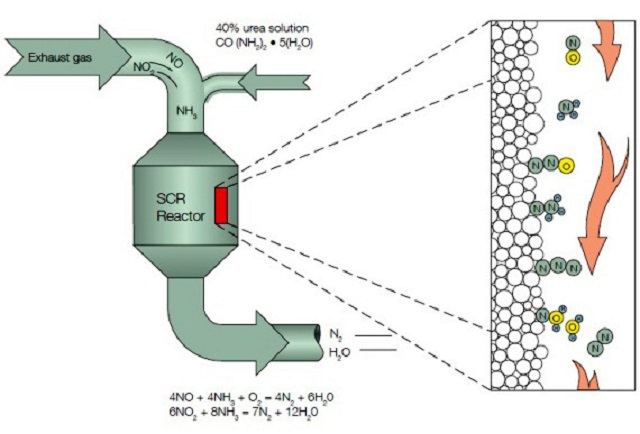 Another concern that has been raised regarding the SCR was the need of scrubbers to remove sulphur oxides to avoid bad catalyst deterioration and the issue on whether or not there is enough available space onboard to install both systems (SCR and scrubbers). Nevertheless, the combination of ECAs for NOx and SOx emissions can ensure that either low-sulphur fuel or scrubbers will be used and so bad catalyst deterioration is avoided.

Scrubbers may be installed either before or after the SCR unit:

Regarding the issue of urea availability (urea is already widely produced for use in agricultural and industry applications) there are hundreds of ships that are equipped with SCR systems and these ships need to use urea which means that urea for marine use is available in most of the world including Canada, the United States, Europe, Asia, and the Middle East. One provider for example, of urea for marine use is YARA. Apart from the above, the total demand for urea for marine use is currently at about 30 thousand tons which translates to less than 1% of the total land-based use. When in 2016 the Tier III NOx regulations will come into force, the need for marine urea will still be small because the regulations are referring to ships that are to be built or undergo a major conversion after 2016, not to mention that ships needing urea will be those that are equipped with SCR and operate in designated ECAs.

Finally regarding the concern on how to make catalysts available or how to dispose of them in the end of their operational life, the catalyst material that is being used in SCR systems is widely know and is available globally. Furthermore, there are companies that specialize in manufacturing catalysts for use in SCR applications, and these companies can source the materials needed to fabricate and sell their product meeting the maritime demand. Just for reference such companies are Haldor Topsoe, Johnson Matthey, Hitachi Zosen, Tenneco etc.

With regard to replacement, catalysts are expected to be operational for thousands of hours, with replacement occurring at defined intervals that can be scheduled under normal ship maintenance, moreover disposal requirements are already available for land-based industries and these provisions can be also used to marine applications. 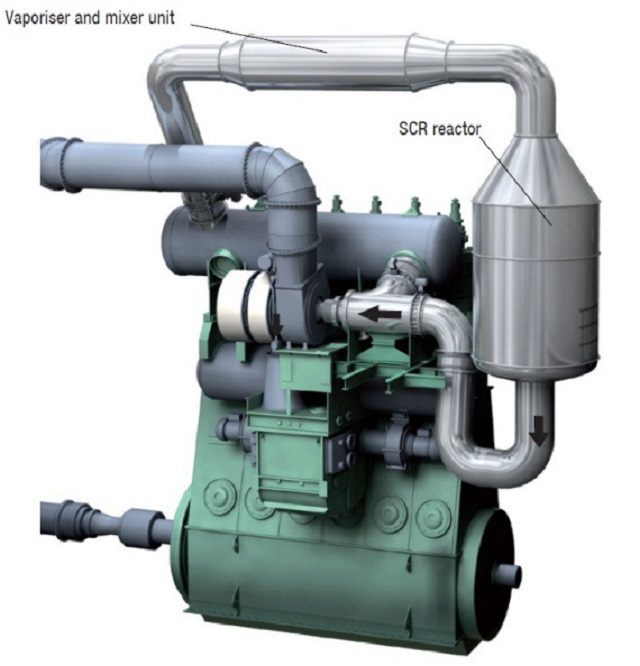 Arrangement of a high-pressure SCR solution on a 6S46MC-C engine (Source: MAN)

Decrease of Competitiveness of Ports and Marine Transport

The second criteria that was stated from Russia regarding the technologies available for NOx reduction was related to the competitiveness of ports and marine transport, the so called “intermodal shift”. According to Russia shipowners will either have to spend a considerable amount of money in order to properly equip their vessels or they will be forced to avoid ports that are located within NOx emission control areas. This could subsequently result in changes in the trade routes that the cargo will follow to reach their destination (e.g. road transport), which might lead to higher air pollution.

Although an analysis of the impacts of NOx regulations on the competitiveness of ports and marine transport has not been made so far from the IMO, US EPA has already performed a review of nine, relevant to this subject, European studies. There is a clear indication from these studies that the potential of a modal shift from sea transport to road or rail transport due to IMO NOx regulations are either insignificant or non-existent. Perhaps the only occasion where an impact of NOx regulations could be taken into considerations is on short sea shipping routes that are in completion with road and rail modes.

Reasonable Capital and Operational Costs on the Technology Realization

A SCR system for a ship of 20,000 deadweight, could cost approximately 6 million euros with a pay-off period of not less than 8 to 10 years. On the other hand US EPA’s economic impact analysis of the NOx Tier III standards on the Category 3 marine diesel engines (engines with displacement per cylinder at or above 30 liters) concluded Tier III would cost from about $367,400 to $678,300 for medium speed engines, and from $605,500 to $2,060,300 for low speed engines, depending on engine size. In the US EPA study there is also examples of the relevant cost based on specific ship types. For example for a containership the increase on the cost for a ship with a medium speed, 13,900 kW engine, is approximately $687,800. For a ship with slow speed 27,500 kW engine, the estimate is $1,533,100. The comparison to a new vessel price of $70 million to $165 million, represents a 1% to 2% increase in vessel’s cost.

Apart from the above costs, shipowners will have to face an additional operating cost because of the urea consumption. According to IACSSEA this operating cost is between € 5 and € 7 per MWh engine power.

Such costs, as described above, are small in comparison to the total capital and operating cost of a ship, especially when compared to the substantial human health and welfare benefits that can be achieved through reduced NOx emissions.

SCR technology has been installed in over 500 vessels, a list of such vessels can be found in Annex 2 of MEPC 65/INF.10. The technical background to implement the Tier III NOx standards is clearly available and engine manufacturers are ready having started the certification of engines of all sizes to these limits.

Engine manufacturer’s, as well as other companies involved in the development of NOx emissions reduction technology, relied on the effective dates that were agreed in 2008 and they have also invested money in research and development.

Moreover, delaying the entry into force date of the Tier III standard for five years despite the availability of the relevant emission reduction technology would put many people and ecosystems at additional risk of health and environmental degradation.

IMO MEPC’s decision last Friday was clearly the result of negotiations between those who had objections, maybe because their stakeholders are unprepared or unwilling to implement NOx regulations at this stage, and those who have already been prepared and are able to implement such NOx emission limits.

It is worth mentioning that the United States is the first country where the regulations will apply already from 2016.

Stavros Kairis is the Founder & Developer of Officer of the Watch. He is a Mechanical Engineer working in the maritime industry. Stavros studied Mechanical Engineering in the National Technical University of Athens and he was attracted to the maritime and offshore industry from his early days at the university. His interests evolve around geopolitics, human behaviour and technology.