“Our volumes have been strong this fiscal year compared to fiscal 2018, particularly with SCPA’s container business, rail dray program and inland port operations,” said Jim Newsome, SCPA president and CEO. “We plan to continue this momentum as we wrap up fiscal year 2019 at the end of June, securing our place as a top 10 container port in the U.S. I am immensely proud of our team for handling record-breaking volumes amid global trade uncertainty.”

As measured in pier containers, or boxes handled, SCPA moved a record 118,048 containers across the docks of the Wando Welch and North Charleston terminals in May, surpassing the previous May record of 113,531 pier containers in 2018. 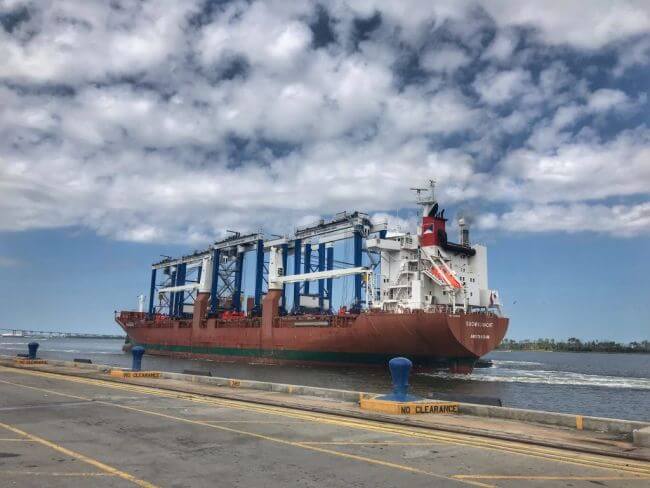 Inland Port Greer handled its highest monthly container volume last month, with 15,563 rail moves. The facility has handled 128,515 rail moves since July, up 19.4% from the same time a year ago. Inland Port Dillon saw continued growth with 2,578 rail moves in May, for total fiscal year-to-date volume of 27,001 rail moves.

In non-containerized cargo, the Port’s breakbulk facilities in Charleston handled 64,461 pier tons in May, including 19,938 vehicles. The Port has handled 570,420 pier tons since the fiscal year began in July.

SCPA’s RapidRail dray program, which provides a seamless connection between the marine terminals and rail yards, has significantly grown. The Port now handles nearly 25% of its volume by intermodal container rail, with 31,709 rail moves in May.

The Port also recently took delivery of five rubber-tired gantry (RTG) cranes, which will further modernize operations and increase container yard capacity at Wando Welch Terminal. The Port has received 14 of the 24 new cranes ordered for the Wando terminal; the terminal currently has 52 RTGs overall.

“SCPA is on track to end fiscal year 2019 strong after achieving its busiest May in Port history,” SCPA Board Chairman Bill Stern said. “The continued growth is a testament to SCPA employees and the maritime community. SCPA is well positioned to execute on its capital expenditures that will better prepare the Port of Charleston for the influx of cargo and bigger containerships in the coming years.”

SCPA announced that Beverly Cowartopens in a new window will become SCPA’s Senior Vice President of Human Resources on July 1. Cowart has served as SCPA’s Human Resources Director for the past two years.

Robert Mozdean plans to step down from this position at the end of the month to return to the Northeast with his family.

“Bob has done important work for the Port over the last several years and I wish him all the best in his future endeavors,” Newsome said. “We now look forward to Beverly leading the human resources team. Her substantial experience will lend itself well to ensuring the Port remains one of the Best Places to Work in South Carolinaopens in a new window and to continually cultivating a talented workforce as we head into fiscal 2020.”

Cowart has a decade of experience as an engineer, and more than two decades of experience in Human Resources. She most recently spent six years at MWV/Ingevity as manager of global learning and organizational development before joining the Port. Cowart earned a Bachelor of Science in industrial engineering from Auburn University and a Master of Business Administration with an emphasis in human resources from Charleston Southern University.

The application process is now open for SCPA’s Community Giving Programopens in a new window, which dedicates a portion of Port revenues to partnership projects that support local communities. Awards are available in three levels: $5,000, 2,500 and $1,000.

Applications must demonstrate a clear fit within one of the following focus areas: maritime commerce, economic development, environmental awareness and community outreach. The application process is open through 5 p.m. July 31.