NYK and NYK Group companies Japan Marine Science Inc. (JMS) and MTI Co., Ltd. are participating in the Designing the Future of Full Autonomous Ship Project (hereinafter referred to as the DFFAS Project).* Comprising 22 domestic Japanese companies, the project has been decided to be sponsored by the Joint Technological Development Programme for the Demonstration of Unmanned Ships** under the administration of the Nippon Foundation.

Outline of the DFFAS Project 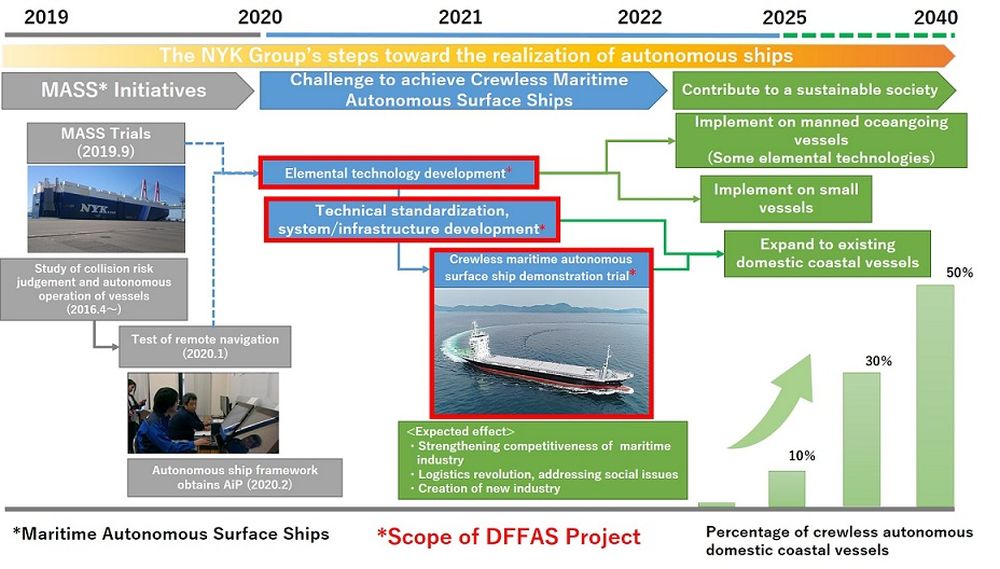 The DFFAS project will work toward the standardization of technology and the establishment of systems and infrastructure as well. Moreover, the project plans to carry out a long-distance demonstration trial within FY2021 in congested waters using a domestic coastal containership to realize the world’s first crewless maritime autonomous surface ship.

Conceptual image of the realization of crewless autonomous ships

The DFFAS project has the following characteristics under the concept of “creating the future of crewless maritime autonomous surface ships — a grand design devised by various experts.”

** A subsidization scheme to cultivate further momentum for technological development in the field of crewless maritime autonomous surface ships, promoting changes in logistics, economies, and social infrastructure in Japan, and supporting such technological development through the success of the world’s first crewless autonomous operation trials by domestic coastal vessels.