In addition to increased energy-efficiency, the ship will have the capability to adapt flexibly to major LPG terminals worldwide, as well as specifications compatible with the new expanded Panama Canal. Completion and delivery are scheduled for the end of March 2019. 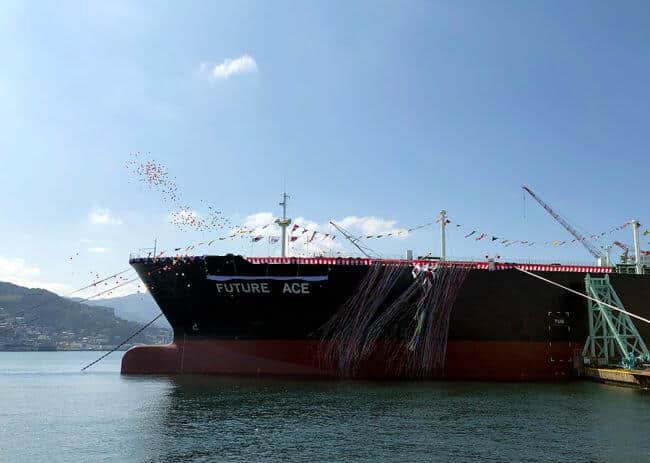 The christening ceremony, held at MHI’s Nagasaki Shipyard & Machinery Works, was attended by representatives of the ship owner, along with many other guests. JX Ocean President and Representative Director Shinji Inaba announced the name of the ship, while the wife of the charterer’s representative performed the ceremonial rope cutting.

The name “FUTURE” refers to the “X” (meaning “future”) of the JXTG Group, of which JX Ocean is a part. “ACE” was chosen because A (the first letter of the English alphabet) represents the first of newly constructed LPG carriers that will be part of the planned FUTURE series, and because its association with “first-rate” or “forefront.” Of note, this is the 29th vessel built under contract at Nagasaki Shipyard & Machinery Works for JX Ocean and its predecessor company.

The FUTURE ACE is equipped with a proprietary hull form (developed with the design and manufacturing expertise of MHI Group) that aids in providing exceptional fuel-efficiency and compatibility with the various LPG terminals around the world. Specifically, the vessel utilizes the hull form (optimized with the latest development technologies) and a screw propeller, (combined with the Mitsubishi Reaction Fin) to improve overall propulsion efficiency.

The ship is also equipped with the Mitsubishi SOx Scrubber System, which complies with the tighter regulations on marine SOx emissions that will come into effect in 2020. This is the first time Mitsubishi Shipbuilding has utilized this system for a ship built in-house. In a continuous effort to contribute to stable, global energy supplies and environmental conservation, Mitsubishi Shipbuilding and MHI Marine Structure will continue developing and refining fuel-efficient and sustainable LPG carriers.