You are here: Home › Know More › Top 10 Longest Ships in the World in 2012
TwitterFacebookLinkedInPinterestBuffer

With sizes of new build ships increasing every year, the list of the longest ships in the world keeps varying. As old ships get scrapped and new ones are added to the list each year, the shipping industry is seeing some of the best ships every made in the maritime world.

Detailed below are ten of the world’s biggest ships for the year 2012. Kindly note the list is only based on the length of the ships.

Under the ownership and operation of the shipping conglomerate Moller-Maersk, the E-Class container vessels are still the largest ships in the world in 2012 with each ship measuring almost 400 metres lengthwise and almost 60 metres width wise.

Maersk has a fleet of eight such E-Class container vessels, each with a carrying capacitance of almost 15,000 TEUs (Twenty-foot Equivalent Units). Emma Maersk is the largest ship of the E-Class series. Maerk Line’s Triple-E Series, when launched in 2013, will become the largest ship in the world, taking the first position.

With a capacitance of around 10,000 TEUs, the newly Marco Polo container ship is listed second in the list of largest ships of 2012. The ship measures 396 meters in length and 54 meters wide. 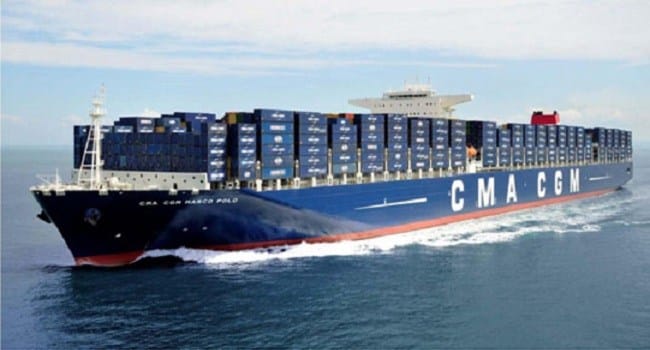 The vessel is operated by the French shipping conglomerate CMA CGM and was built at the South Korean shipbuilding company Daewoo.

Also known as TI Asia and TI Africa, these ULCCs are listed third in the list of biggest ships for the year. These ships measure around 380 metres lengthwise with a GRT of over 2, 30,000 tonnes and a DWT of over 4, 40,000 tonnes. They originally belong to the TI class super tankers.

These two long ships, originally christened as Hellespont Fairfax and Hellespont Tara respectively, were built almost a decade ago. These two vessels measure over 1,200 feet lengthwise with a beam of over 220 feet and a displacement of almost 68,000 long tonnes. They also belong to TI class tankers and measure around 380 meters in length.

Named for the conglomerate that operates these ore carrying vessels, the Valemax big ships are in actuality a fleet of 35 vessels.

At present though, the entirety of the fleet is not in operation, it is expected that the shipping cumulate would be putting the totality of the fleet into operation by the next year. Technically categorised as Chinamax vessels, the Valemax fleet measure about 360 metres lengthwise with a beam of over 60 metres and operational speeds touching up to 15 knots.

6. Allure of the Seas

Built in the year 2010, the Allure of the Seas is the sister vessel to the Oasis of the Seas.

The sixth vessel in this list of largest ships 2012, the Allure of the Seas has a length of 362 m.

7. Oasis of the Seas

The Oasis of the Seas is a highly renowned cruise vessel, owned and operated by the Royal Caribbean cruise cumulate.

It is also the seventh vessel to feature in this compilation of longest ships with dimensions of over 360 metres lengthwise, with a beam of almost 50 metres and a height of over 70 metres. With a draught of over nine metres, the Oasis of the Seas is capable of touching cruising speeds over 22 knots.

The vessel is the chief ship of one of the biggest cruise tour empires, the Carnival conglomerate in the year 2003.

Queen Mary 2 is eighth in the biggest ships 2012 compilation with a lengthwise measurement of 345 metres, beam of about 41 metres and speeds touching up to 30 knots.

The Berge Stahl measures almost 343 metres lengthwise with a beam of almost 64 metres and ranks ninth amongst the longest ships for 2012. The bulk cargo carrier ship is operated by the Norwegian corporation Bergesen and was built at the South Korean shipbuilding company Hyundai.

The tenth and the only naval ship to feature in the compiling of largest ships of 2012, the USS Enterprise is an aircraft carrier ship. The ship measures over 342 meters length wise with a beam of almost 133 feet and speeds ranging over 33 knots.

Statistical compilations are more often than not variable. This is why each year, statistical tabulations of several important aspects are modified so as incorporate any new changes in the form of additions or deletions to this ever-changing panorama.

In the maritime world, both the construction of newer vessels and the breaking down of older ships necessitate modifications to statistical compilations with respect to structural specifications of vessels being operated every year.