In the year 2019, the maritime industry saw the launch of some of the most impressive vessels which are also currently the “world’s first” among their types. Let’s take a look at some of the top launches made in the industry this year.

This vessel was developed to provide a means of transporting liquefied hydrogen at 1/800 of its original gas-state volume, cooled to –253°C, safely and in large quantities over long distances by sea.

Kawasaki plans to install a 1,250 m3 vacuum-insulated, double-shell-structure liquefied hydrogen storage tank, currently being manufactured at Harima Works, on the ship and complete the vessel’s construction by late 2020.

Once complete, the SUISO FRONTIER will be used for technology demonstration testing in Japanese FY 2020 aimed at the establishment of an international hydrogen energy supply chain*1 in which liquefied hydrogen produced in Australia will be shipped to Japan.

Hydrogen is gaining popularity as a key next-generation energy source to combat global warming. It does not emit CO2 or other greenhouse gases during use, and expected applications include power generation, fuel cell vehicles and more.

The world’s first X-BOW® cruise vessel was launched this year by Ulstein.

The ‘Greg Mortimer’s characteristic X-BOW® design feature improves onboard comfort in head seas, as it helps to reduce slamming and resulting vibrations. The vessel can thus keep up speed in adverse weather to get quickly through the harshest stretches of waters, typically the Drake Passage.

The X-BOW® feature was launched by Ulstein in 2005 and is implemented in more than 100 vessels worldwide, mostly offshore vessels.

The vessels, the cleanest DPSTs ever built will emit 40-48% less carbon than equivalent vessels built in 2008, meeting the International Maritime Organization’s (IMO) target of reducing carbon (CO2) emissions by 40% against 2008 baselines by 2030, and halving CO2 emissions by 2050. 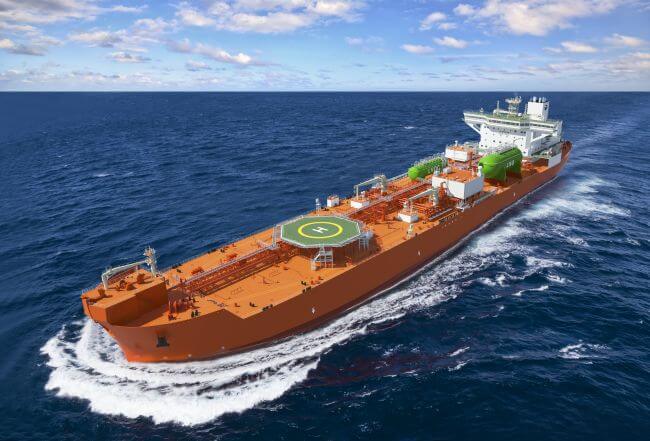 The vessel was a 173,400m3 LNG carrier ordered by Maran Gas Maritime in Greece in June 2016 and was applied by DSME ALS (Air Lubrication System) developed by Daewoo Shipbuilding & Marine Engineering.

The air lubrication system is one of the energy-saving technologies that injects air into the bottom of the ship to create a continuous air layer between the hull and seawater, thereby improving fuel efficiency by reducing frictional resistance during operation.

These configurations also reduce or eliminate exposure of crewmembers to challenging sea and weather, toxic fumes and other safety hazards.

The vessel can perform the following capabilities: