The primary airborne pollutants from ships are present in the exhaust/flue gases generated by the main and auxiliary engines, together with the boilers. These pollutants are produced by the combustion of hydrocarbon fuels and the main products resulting are listed below.

Regulations for the Prevention of Air Pollution from Ships were adopted in the 1997 protocol to MARPOL 73/78 and are included in Annex VI of the Convention. The Protocol adopted in 1997 included the new Annex VI of MARPOL 73/78, which entered into force on 19th May 2005.

MARPOL Annex VI sets limits on sulphur oxide and nitrogen oxide emissions from ship exhausts and prohibits deliberate emissions of ozone-depleting substances. The annex includes a global cap of 3.5% on the sulphur content of fuel oil from January 1st, 2012 and this will further reduce to 0.5% in January 2020.

The reduction in exhaust gas emissions may be achieved by the use of cleaner fuels or through cleaner engine technologies, such as modified combustion cycles and/or exhaust gas cleaners (scrubbers, filters, etc), either singly or in combination. 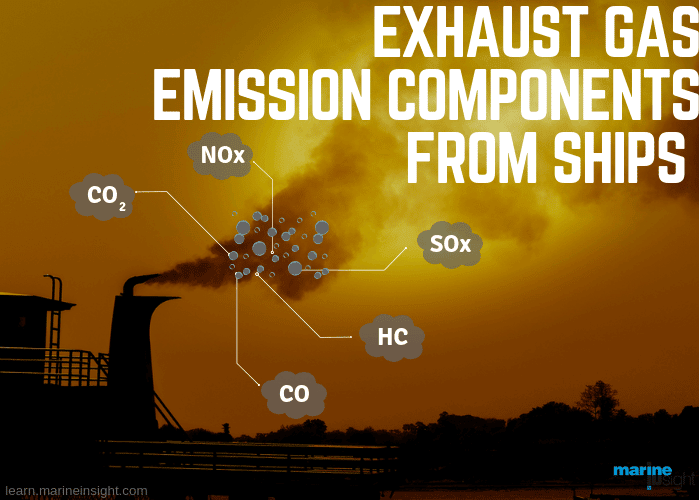 This term covers the combinations of nitrogen and oxygen produced as a by-product of the combustion of fuel in the air. The gases produced are predominately nitric oxide (NO) and nitrogen dioxide (NO2) with traces of other complex chemicals including nitrous oxide (N2O) and nitrates (NO3). The amount produced is directly related to the combustion temperature – the greater the peak temperature, the higher the level generated. Although these gases also occur in boiler flue gas, the lower flame temperature results in lower percentages being produced. The high temperatures and pressures that occur in diesel engine cylinders combine to produce relatively high levels of these toxic gases.

All of these gases combine with water and oxygen in the atmosphere to produce nitrous and nitric acids which are highly corrosive. Nitrogen dioxide is a reddish-brown highly toxic gas which causes lung damage. At sea level, these gases react with organic compounds to produce low-level ozone (O3), a significant pollutant and creator of smog. In the upper atmosphere, these same gases, especially NO2, react to remove ozone. As these gases readily travel great distances from the actual source of production, the impact of the resulting pollution (smog, acid rain etc) can be many miles away from the source. 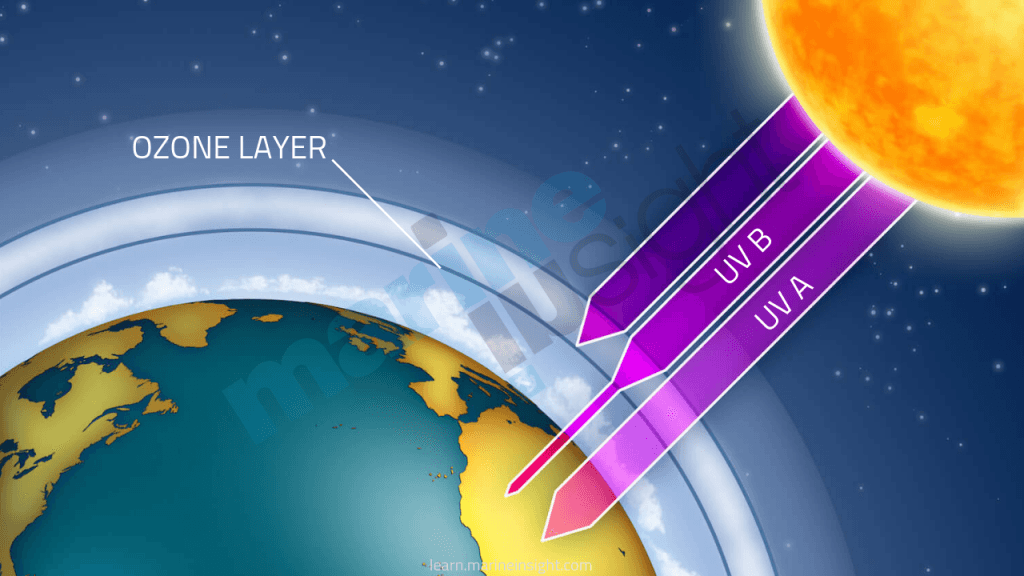 The emission levels of oxides of nitrogen are at present complied with by modifications in the engine design. Regulation 13 of MARPOL Annex 6 divides marine diesel engines into groups by date of manufacture, stating the maximum emissions that are permitted. However, if the engine is modified, the rebuilt engine must comply with the level applicable at the date of modification. To allow verification of compliance with this requirement, all marine engines must have individual records of the parameters as built. This includes component details and settings of all items which may influence the production of NOx.

Related Read: What is Nitrogen Oxides or NOx air pollution from Ships?

Marpol Annex VI allowed special Sulphur Emission Control Areas (SECAs) to be established with stringent controls on the emission of oxides of sulphur (SOx). In these areas, the sulphur content of fuel oil used was not to exceed 1.5%. This limit reduced to 1.0% on the 1st July 2010 and then further reduced to 0.1% from the 1st January 2016.

IMO will cap sulphur in marine fuel at 0.5% globally from January 1st, 2020 from current 3.5%. This will apply outside ECA where the limit is already 0.1%. Ships will have to use cleaner fuels with less sulphur content which will be an expensive affair or switch to installing scrubbers.

Particulate matter (PM) is usually divided into two classes based on particle size and comprising soot, ash and unburnt fuel, together with secondary sulphate and nitrate particles. The Polycyclic Aromatic Hydrocarbons (PAH) present in residual fuel oils are highly carcinogenic and unburnt particles are represented in the soot produced together with heavy metals and organic material. All of these may be carcinogenic and the smaller particles <PM2.5 can be drawn deeper into the bronchial passages and are known to induce asthma, bronchitis and heart failure. The larger particles >PM10 are normally deposited relatively close to the point of origin, however, the lighter and smaller particles may stay airborne for considerable distances. Running the engines on distillate fuel (marine diesel or gas oil) reduces the total amount of particles but does not eliminate them.

Carbon dioxide in the atmosphere is a major greenhouse gas, and internationally, great effort is being made to reduce the amount released. It is the major product of combustion and is more than 5% of the exhaust gas from a diesel engine and 13% from a water-tube boiler. In shipping, the reductions are being achieved by gradual improvements in fuel consumption involving modifications to the propulsion system (engines and propellers), smoother hull coatings and design changes to the hull form. At present there is no general legislative control for the amount of CO2 released, however, in the United States, southern California has introduced a speed restriction of 12 knots for vessels within 20 miles of the coast. This is for the explicit purpose of reducing total CO2 emissions from shipping. It is probable that other areas will bring similar restrictions into force.

VOCs are contained in the lighter fractions released from petrochemical and oil products, including crude oil, during cargo operations and tank cleaning. At sea level, these compounds react with oxides of nitrogen to produce low-level ozone (O3), a significant pollutant and creator of smog. Ozone is a deep lung irritant. VOCs also play a major role in forming other photochemical oxidants which are responsible for numerous chemical and physical atmospheric reactions. Where possible, these should be discharged to shore through the vapour return line. A small unrecoverable amount of vapour will be released from the vessels fuel oil system, especially when heating fuel oil.

Apart from the use of cleaner fuels and improvements in fuel efficiency, the methods presently available for achieving the desired reduction in emissions may include one or more of the following: • Modifications in engine design.

Low-speed results into lesser consumption of fuel as Fuel Consumption (in MT/mile) is directly proportional to (Ship’s Speed). This helps to reduce Nox emissions from the main engine. Also using cleaner fuels like ultra-low sulphur fuel oil, marine gas oil, marine diesel oil help in reducing exhaust gas emissions drastically. According to MARPOL regulations, from 1st January 2020, fuel with less than 0.5% of sulphur has to be used to reduce emissions. 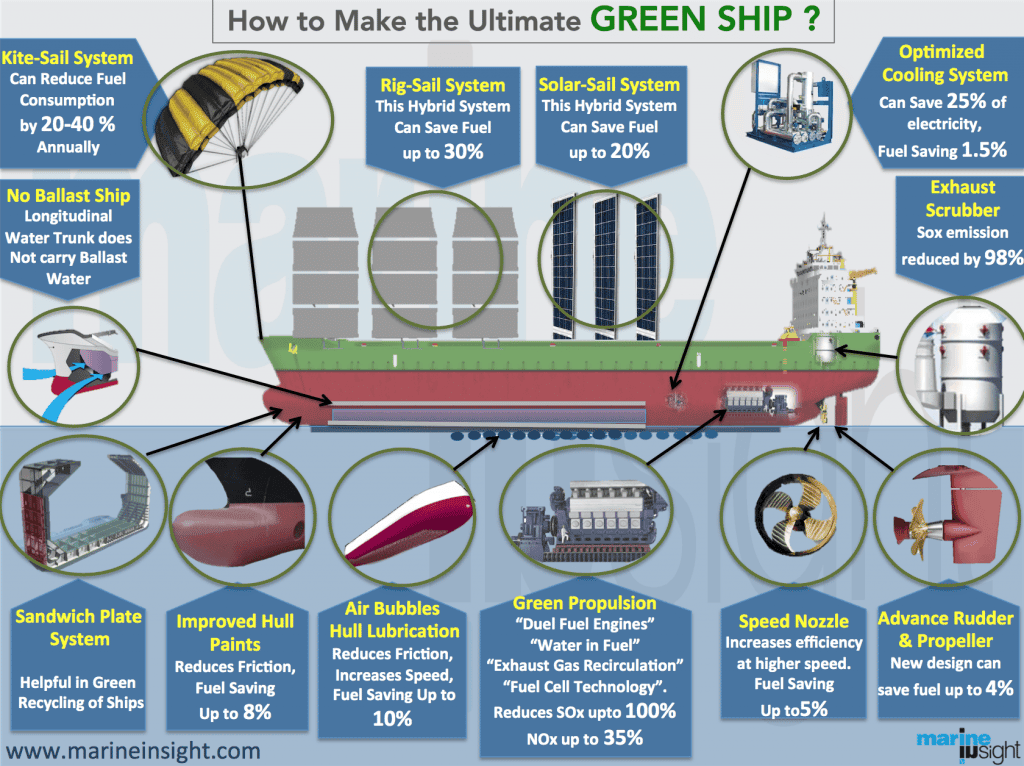 How to Make the Ultimate Green Ship?

Continuous monitoring of the exhaust gases, together with records of the resulting measurements, will also be required. At present, the only approved method for the removal of CO2 from exhaust gases is a scrubber system, utilising electrolysis to increase the alkalinity of the sea water before cleaning the gases. This process is claimed to reduce the CO2 content by >75%, NOx by >60% and SOx by >98%. The effluent is then treated before discharging non-acidic water back to the sea. Any solids collected from the washing process are retained on board for future disposal ashore. Scrubbers are also able to reduce particulates by between 40 and 60%.

The use of an approved scrubber enables a vessel to comply with low sulphur regulations even when using high sulphur (<4.5%) heavy fuel oil. As the gases leaving the scrubber will contain less than 0.05% sulphur.

When receiving bunkers it is essential that the ‘Bunker Delivery Note’ (BDN) specifies the sulphur content of each grade delivered and must be signed by both the supplier and the receiver. If more than one bunker barge is used, then a separate BDN for each barge will be required.

The BDN should also record the seal number of the MARPOL sample container which must be signed by the supplier’s representative, the sample must be at least 400ml. These samples must be retained on board for Port State Control (PSC) inspections and not used for routine analysis. The BDN must be retained on board for at least three years after delivery of the fuel and the MARPOL sample until the fuel has been consumed or for a period of at least one year, whichever is the greater. If when a bunkering operation has been completed the BDN does not include all the required information, or the samples received are not signed/labelled, a letter of protest must be issued to the bunker supplier.

The vessel’s Flag State authority and the local Port Authority must also be informed immediately. Copies of all relevant documents and correspondence must then be attached to the BDN and retained on board for the required period. BDN is a very important document as it has information of all the fuel oil properties provided by the supplier.

What is an Intermodal Container?

Important Points To Note While Preparing Ships For Lay-up
Want to share your tips and advice? Got questions? Visit the community forum to ask questions, get answers, meet people, and share your tips!