Shock Pulse Monitoring also known as SPM is a patented technique of predictive maintenance by measuring vibration and shock pulses of bearing in motors and to identify their condition and operating life before the next overhaul procedure.

It was introduced in 1969 and is now a known Condition Monitoring method for monitoring of machines like electric motors using roller bearing.

Difference between SPM and other Vibration Measurement Techniques

Vibration analysis has been used for motor predictive maintenance on ships for many years. Traditionally marine engineers have been using a listening rod to listen to the sound and ascertain the condition of rotating machinery. Nowadays to avoid premature overhaul of motors many companies are supplying vibration analysis pens and SPM instruments on board ships. However there is a difference between vibration analysis and Shock Pulse Measurement.

When two metal surfaces contact each other while in motion, an impact occurs and a shock wave develops, which travels through the metal. The shock wave is in ultrasonic range and is around 36 KHz. This shock wave is utilized in the SPM.

As impact continues the metal flexes and is compressed and recoils. This second phase is called vibration. The frequency of this vibration is dependent on stiffness, shape, mass and the dampening property of the material.  In SPM this phase of collision i.e. vibration is filtered out as it is depending on the structure and the material of the machine. Thus the inaccuracies that are frequently encountered by hand held vibration analysis pens is not here, especially in machinery with flexible mountings and working in vicinity of other vibration prone machinery. 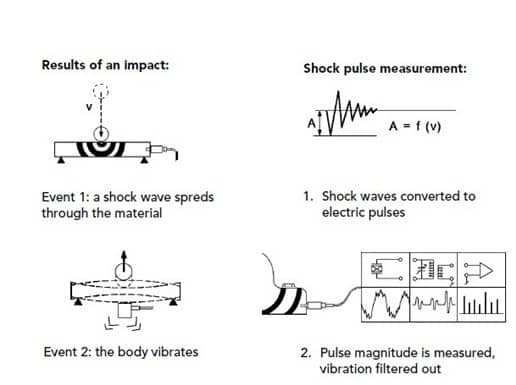 Another difference between SPM and other vibration measurement techniques is that in SPM the transducers respond and resonate to a frequency of 36 KHz only, which ensures a calibrated response and accurate measurement to the shock pulses.

How does SPM Works?

Whether new or old, any bearing generates shocks in the interface between the loaded roller element and the race way. Initially these shocks or vibrations are subtle and hardly felt till already damage is done, but these are captured routinely by the SPM machine which tells about the condition of the bearings, the state of lubrication and the maintenance interval required. This type of monitoring and maintenance based on this evaluation is called as Condition Monitoring System or Condition Based Monitoring.

The amplitude of shock pulses measured by the SPM meter is due to the following factors:

The shocks are received by the SPM transducer which then gives an output signal proportional to the magnitude of the shock felt.  The SPM meter measures the shock pulses per second and then lowers its threshold so that two amplitude levels are discovered, first the decibel carpet value of 200 shocks per second and secondly, the maximum level of incoming shock under 2 seconds.

The peak value can be ascertained by increasing the threshold value till no signal is received.  In this equipment the noise generated due to the rolling velocity is negated by entering the shaft diameter and RPM of the motor. This gives an accurate condition assessment of the machine being monitored.

The amplitude of the shock is a function of the rolling element and the instrument measures the absolute value and subtracts from it the expected shock value from a good bearing at similar speed. This gives us an indication of the bearing operating condition. 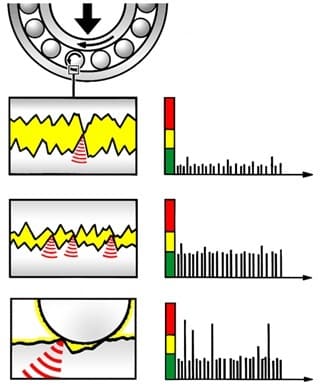 There are three condition zones namely Green for Good Condition, Yellow for Caution and Red for Damaged condition. The peak value measured by the operator gives the status of the machine and the zone it belongs to.