Freedom Ship is a highly innovative maritime housing project conceptualized by an American engineering pioneer, Norman Nixon. The project is quite similar to the idea of floating cities serving as alternate residential locales in the distant future.

However unlike the floating residential complexes, the Freedom Ship concept has been aimed at providing permanent residential, recreational and commercial avenues aboard a ship to help patrons be free of the innumerable taxation burdens. 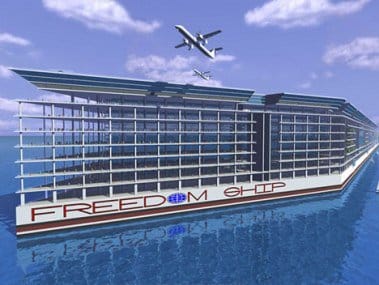 Freedom Ship has been visualised as a self-contained vessel with ultra-luxurious amenities that include dockage facilities for private yachts and planes, and premium healthcare institutes.

For a vessel that promises to offer so many feasibilities, it’s estimated that the construction cost of the Freedom Ship could total to over US$ 10 billion. Although actual construction hasn’t yet been started on the vessel, if the Freedom Ship concept duly takes off, Norman Nixon’s maritime marvel would be the biggest commercial vessel in the world with the following salient features: 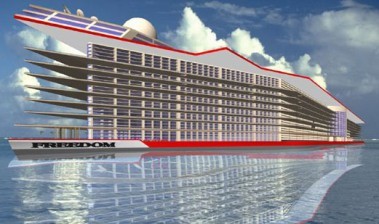 allowing its occupants to disembark at their port of choice, if so required.

Because of the extremely large size of the Freedom Ship, the construction of the vessel has been pinpointed to be of pivotal importance. In order to ensure that the vessel doesn’t turn turtle because of uneven balance in its base structuring, the foundation of the vessel will be built by connecting by steel cubicles as if to form a longer flat-bottomed hoy.

The Freedom Ship concept also offers highly suitable eco-friendly additions to its engineering concepts. This includes effective waste management systems, sewerage disposal systems and highly effective methodologies for reprocessing and recycling. The engineering brilliance of the ship is also seen in the blueprint of its engine systems. As per the innovator’s vision, around 100 diesel engine systems will be incorporated to manoeuvre the vessel. The cost of equipping these engine systems, each with a capacity to generate almost 4,000 HPs, is expected to touch around US$ one million. 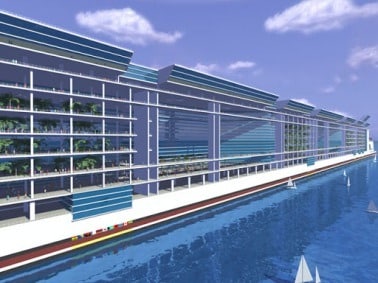 Potential owners need to register to book their residential units within the Freedom Ship. Smaller units of around 300 square feet are expected to cost slightly over US$ 1, 00,000 while crossing several million dollars for bigger residential units.

Construction of the Freedom Ship has been stalled because of several doubts arising about the workability of the vessel. Although various maritime experts are confident about the vessel’s success, the immense cost involved has also acted as a barrier for the vessel’s construction. If these barriers are eliminated appropriately, then the Freedom Ship concept will be truly a wonder worth spending money on.

Watch the Video below:

You may also like to read – Concept: Water Discus Underwater Hotel