Machines led us to the industrial revolution. The world we are living in is very much different when compared to the time a few decades back. Though there have been several drawbacks, the fact is that machines have made our lives easier and better. In this new age, robots are adding a new dimension to this modern world.

Industries around the world are now showing more interest in robotics because it represents the key to future medicine, warfare, better economy, and well-being. Even maritime industry is not untouched from the robotization. With the introduction of a variety of new robotic technologies, the day is not far when robots will carry out several important jobs both at sea and on shore.

Let’s take a look on some of the robotic technologies of the shipping industry that have made news lately.

1. Fire Fighter Robots: Shipboard Autonomous Fire Fighting Robot (SAFFiR), developed by Naval Research Laboratory in collaboration with Virginia Tech and other US universities, is an autonomous humanoid robot capable of detecting and suppressing shipboard fires and working shoulder to shoulder with human firefighters using advanced sensors. The idea is not to replace humans in firefighting but to aid them in firefighting operations on ships.

In the case of fire on ships, these robots would perform tasks such as turning valves, picking up and dragging fire hoses, and putting water on fire. This concept can make use of different fire suppression technologies including PEAT grenade. The firefighting robot has a vision system to search for survivors and can withstand heat up to 500 degree Celsius. It is also outfitted with multi-modal sensor technology for advanced navigation to overcome obstacles and stay upright even in pitching and rolling sea conditions. The robots can respond to gesture and commands, and its sensor package includes a camera and gas sensor. IR and UV camera help it to see through the smoke and detect the source of excess heat respectively.

Several demonstration and experiments on SAFFiR have been conducted in past couple of months with an objective to enhance the firefighting abilities of US Navy. This service can also be used to tackle a fire in commercial vessels and offshore platforms in future.

2. Hull Cleaning Robots: With increasing consciousness for green shipping, technologies that help in higher fuel efficiency and reductions of carbon-dioxide emissions are in great demand. Hull roughness management using hull cleaning robots can play a vital role in this regard.

The build-up of marine organisms on ship’s hull, also called bio-fouling, reduces the ship’s speed by up to 10%. To compensate the drag, it is said that, a ship may have to use about 40% more fuel. Sometimes, toxic coatings are applied to prevent bio-fouling but they pose threat to marine ecology. An innovative hull cleaning robot namely “HullBUG” has been developed by SeaRobotics and funded by U.S. Navy Office of Naval Research (ONR) to tackle this issue.

The Robotic Hull Bio-inspired Underwater Grooming tool (Hull BUG), is a small autonomous vehicle weighing 30 to 40 kg. It uses four wheels and attaches itself to the underside of ships, using a negative pressure device that creates a vortex between the BUG and the hull. It crawls on the hull surface and performs frequent grooming (light cleaning of fouling films). Sensors provide obstacle avoidance, path cleaning, and navigational capabilities. A fluorometer lets the robot detect biofilm and then it uses rotary brushes or water-jets to scrub the fouling film off.

The developer of the robot estimates that, if these robots are put into practice, there can be  5% improvement in fuel efficiency through proactive grooming, translating into a savings of $15 billion annually for the shipping industry worldwide and reduction in 1 billion tons of greenhouse gases emitted by the fleet.

Similar efforts to develop hull cleaning robots is being done by Keelcrab. The product I-keelcrab is semi automatic robot fitted with ip68 high-resolution camera and can be guided by smartphone or tablet. Keelcrab-one is an underwater robot, which can be controlled by a wired remote control with live video feed.

Traditionally, inspection of huge cargo ships for cracks, corrosion or any wear to ensure that they comply with rising safety standards is a time-consuming task for surveyors. Moreover, they have to risk their own safety to climb every nook and cranny of the vessel themselves. Ship Inspection robots is a robotic technology which can help in this process and also save time and money for owners, improving the accuracy and quality of these important inspections.

A student team from ETH Zürich and ZHdK in conjunction with Alstom Inspection Robotics has developed a lightweight and low-cost Ship Inspecting Robot (SIR). Its prototype is capable of conducting a visual inspection of ballast tanks and hard to reach parts in huge cargo vessels. Its four magnetic wheels and overlapping wheelbase enable SIR to navigate the I-beams and other awkward obstacles found inside ship ballast. These robots can be controlled via a wireless transmitter with live video feed and its four infrared distance sensors help in detecting edges and obstacles.

Furthermore, SmartBot is working on a project namely ROBOSHIP which aims to develop an intelligent multi-sensor robot system for inspection and maintenance of the water ballast tanks in ships. Bluefin Robotics has also designed HAUV (an underwater robot) for US Navy to autonomously perform ship hull inspection and obtain 100% sonar coverage. It is now developing it further to meet commercial challenges.

4. Anti-Piracy Robots: Recon Scout throwbot developed by Recon Robotics, is an anti-piracy robot which will fight against maritime piracy. 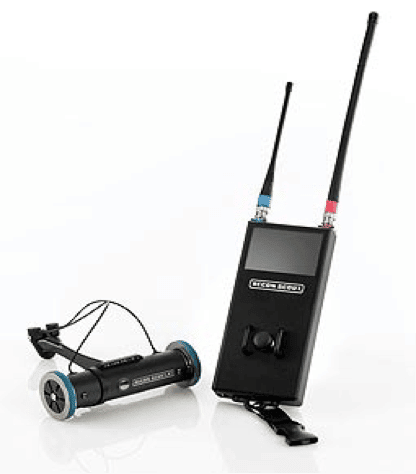 The dumbbell-sized robot can be fired from cannon within 5 seconds and can survive throws up to 120 feet. Its magnetic wheels help it to crawl on the ship’s hull before it reaches the deck. It can be controlled by joystick from the nearby command center. The robots can keep eye on piracy activities using its cameras that can see even in darkness using infrared camera. The developer aims to quickly bring marsupial robot deployment system which enables the robot to break apart to eject smaller robots. The real time inside information can help the Navy team to assess the situation and act accordingly. Recently, the developer has been given the contract to deliver Recon Scout XT throwable micro-robot kits to assist US Navy.

5. Robotic Vessels: Recently, Rolls-Royce put forth the designs of unmanned remote controlled cargo ships. Though some experts are doubting the idea to convert into reality, the manufacturer claims to do so within a decade using modern technologies.  The world’s first remote-controlled unmanned cargo ship by Rolls-Royce is a concept which revolves around a no-crew ship that can be controlled from the shore. A research project called MUNIN –  Maritime Unmanned Navigation through Intelligence in Networks supported by the European Commissions, aims at developing and testing this autonomous ship concept.  Read more about this concept here.

Moreover, a robotic unmanned surface vehicle (USV) has been developed by US Navy to sweep across the ocean to detect mines using magnetic and acoustic technologies namely Unmanned Influence Sweep System (UISS). UISS is expected to hit a fleet of US Navy till 2017. Unmanned robotic vessels can help to fight piracy as well for which researches are going on.

Robotization in the maritime industry can help in accomplishing a variety of important tasks with greater efficiency and safety, provided they do not affect the employment opportunities in the industry which are already grim in several parts around of the world. Though robots can perform and help in many crucial jobs, it would be extremely difficult for them to replace the experience, knowledge, and skills which seafarers bring along with them to the sea. A healthy balance between robotization and seafarers’ efforts is the key to enhancing the quality and safety of shipboard work for the benefit of the whole industry.

Sukant Kumar is pursuing Naval Architecture at IMU, Vizag, India. An ardent lover of the shipping industry and its various aspects, he likes to read and write about latest technologies and trends that shape the industry.