You are here: Home › Marine Environment › Effects of Ocean Acidification on Marine and Human Life
TwitterFacebookLinkedInPinterestBuffer

Ocean acidification, one of the biggest problems which is threatening both human and marine life, is increasing exponentially. To introduce the phenomenon of ocean acidification, it is important to relate another term which is remotely similar to it.

Most of us are aware of the term acid rain. The mingling of atmospheric acids with the rainwater to cause major problems for every living organism has, over the years become very familiar and is a problem that needs to be tackled effectively for the betterment of the human race so that our future is secure and safe.

Moreover, there seems to have developed a totally new problem that threatens to harm the marine life and indirectly, through them our life. Ocean acidification is a phenomenon that has the power to endanger the life of important marine organisms and through them an entire class of people who depend on fish and fish products for their daily sustenance. 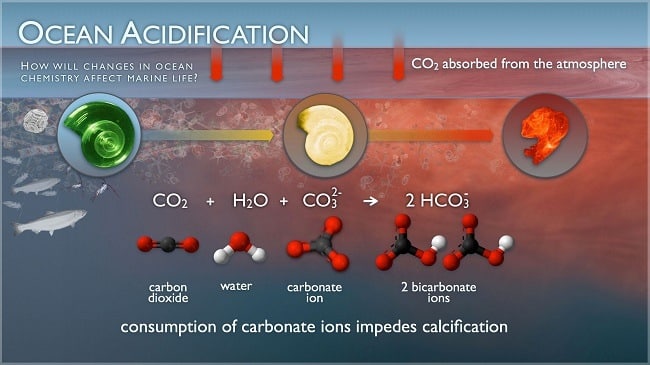 To put it simply, ocean acidification is an error happening in the carbon cycle. Carbon cycle is a biogeochemical cycle in which the circulation of carbon in the atmosphere is detailed. When it comes to carbon and the ocean, it can be simply said that in order to maintain the level of carbon in the atmosphere, the oceans absorb the excess carbon into themselves. It is a naturally occurring procedure and is quite essential for the survival and creation of certain marine life-forms.

When the level of carbon concentration increases in the oceanic water, however, it starts to become damaging for the same life-forms owing to a variety of reasons. Almost everyone is aware of the pH factor that exists in the oceanic water. Owing to the increased concentration of carbon, the H in the pH starts to increase because of which, the pH value starts to decline. Additionally, the increased level of carbon also leads to the formation of an acid known as H2CO3 which starts to block the calcification procedure that water creatures like oysters and crustaceans need importantly.

The absorption of necessary carbon by the ocean is a slow process by itself but because of the high levels of emissions of poisonous vapours like CO2, the process has started to happen quite fast. This change, at such a fast pace due to ocean acidification is something that the marine life-forms are unable to adjust leading to their perishing untimely.

The development that has taken place in our day-to-day lifestyle is primarily responsible for such a condition. Development by itself is not bad but when its effects start to cause problems to other living beings, then it tends to become a problem. In case of a situation like ocean acidification where increased carbon absorption is the major reason for the marine life to feel threatened, it becomes important that we try and resolve the issue.

Ocean acidification, right now might not appear to be a serious problem but when taken into consideration along with issues like global warming and the melting of the glaciers in Antarctica, the problem magnifies from a magnitude of micro to a magnitude of macro and demands a much required immediate attention.

Ocean Engineering: Education, Colleges, Jobs And Salary
How to Minimize the Risks of an Electrical Shock on a Ship?