A cave is defined as a natural occurring which can be accessed either through an opening either on land or through water. While caves located on hard grounds are easier to find and beautiful to admire, there are sea water caves which are rare but are equally spell-binding.

A sea cave, as mentioned earlier, has an opening through the water surface. A detailed list of 10 such amazing strange sea water caves, spread across the globe is enumerated as follows:

The cave’s other name – the more common one – is the Fingal’s Cave. The cave is formed out of basalt shaped in a hexangular form. This strange cave is known for its naturally occurring strange noises and curved roof.

2. Sea Lion Cave:  Composed of basalt, the sea lion cave is located in the state of Oregon in the United States.

The cave’s main allure comes from the eared seals (sea lions) that lounge on the cave’s rocks. Since the cave is located underneath the nearest road transport location, elevators and stairs have been constructed to help visitors in their tour of the cave.

The highlight of the blowholes is that, when the waves that come rolling through and pass through the volcanic rock passages, they erupt into the air just like a hot air spring. The locales are very careful as a single misstep into any one of the passages could result in a person losing his life. The blowholes are located in the Samoan islands located in the Southern Pacific.

4. Blue Grotto: Near to the coastline of the island of Capri in Italy lies the Blue Grotto.

As one of the 10 amazing sea caves highlighted here, the Blue Grotto’s uniqueness comes from the fact that for a sea cave, its entranceway is very small. As a result, the cave can be explored only if the weather conditions are good and the tides are low.

The Great Blue Hole when seen aerially appears to be in a perfect circular form right in the centre of the Lighthouse Coral Reef.

6. Painted Cave: Located in the state of California, the Painted Cave is a part of the island of Santa Cruz. The cave is the world’s second-biggest water cave measuring over 1,200 feet lengthwise. 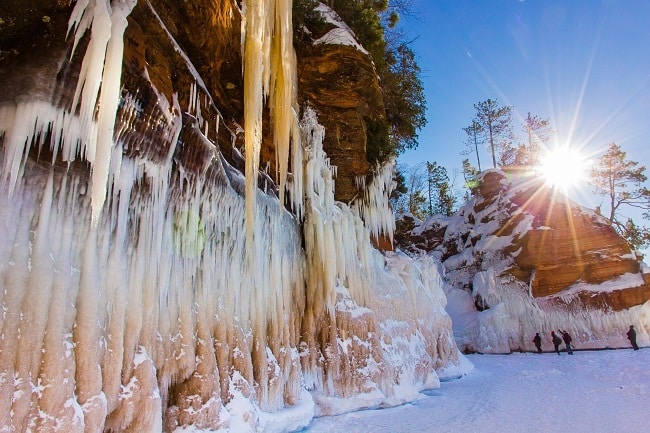 The freezing of the water of the lake and the cave in its entirety during winter gives the strange caves their name. The islands are a favourite spot for canoeing and visitors, who come during the winter season, can very well experience this singular sight of the frozen water caves.

8. Cave of Smoo: The Smoo Cave is yet another Scottish water cave marvel. It is mainly composed of limestone.

The river Allt Smoo, whose course is directly over the cave, is partly responsible for the creation of the cave. The river’s water falls into its depths through the means of a swallow hole. Apart from the Allt Smoo’s freshwater, the cave which was also partly by oceanic water erosion also contains salty water.

The Hole’s depth was fully explored by a diver Jim King in the year 2001.

10. Piula Cave: Located in the Upolu Islands in the Samoan Islands, the Piula Cave is a formation of a small pond created by a cooled off lava passage.

Containing fresh water and extends into the ocean, the pond is a much visited spot for swimming both by natives and tourists to the islands.

Water caves are an important part of the marine eco-diversity. Considering the precariousness of the marine eco-system today, it becomes very important that these marvels are protected and safeguarded so that many generations in the future can have a sight to behold.

Why is the Yellow Sea “Yellow” and the Dead Sea “Dead”?

Tide Table and Its Benefits to the Shipping Industry
Want to share your tips and advice? Got questions? Visit the community forum to ask questions, get answers, meet people, and share your tips!