As part of a drill, the outboard lifeboats and tenders of a passenger ship were lowered and held alongside deck nine by their tricing pennants. The lifeboat’s bowsing tackles were rigged, tensioned from the coach roof and secured to bitts welded to the bowsing tackle blocks fitted to the lifeboat lifting plates.

On the order to release the tricing pennants, the forward crewman was unable to remove the tricing pennant hook release lever pin while at the same time holding the bowsing tackle on the bitts. The overseeing officer went to assist. As the officer removed the pin and operated the release lever, the crew member stepped to one side, which caused the bowsing rope that he was holding to come free from the bitts.

Without tension on the bowsing tackle, the lifeboat swung violently away from the ship’s side and heeled to port. The officer and crew member, who were not wearing any form of personal restraint, slipped from the smooth coach roof and fell 22 metres into the water below. They were quickly recovered by other members of the crew. 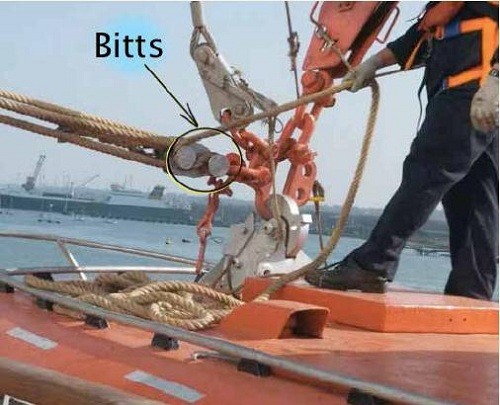 While other factors contributed to this accident, had the men been wearing proper fall restraint equipment they wouldn’t have taken a 22 meter plunge into the harbor waters. When working where risk of falling is present, fall restraint PPE is your last line of defense.