An LPG vessel was outbound under pilotage. On deck, preparations were being made for the changeover from the last butane/propane cargo to the upcoming full propane cargo.

The cargo discharge valve of cargo tank 3S had stuck during the previous discharge and could only be used with a limited rate. The chief officer (C/O) decided to remove the valve spindle assembly as soon as possible because bad weather was forecast before the next loading operation.

This job had been done several times in the past, so the C/O considered it a routine operation; as such, a risk assessment was not performed. The Master was unaware of the maintenance operation at the time.

As on previous occasions, the plan was as follows:

With the bosun and one AB, the C/O completed steps 1-4. Then, with the cadet and another AB joining them, the C/O started to joggle the valve assembly. As soon as the spindle assembly was lifted off, liquid propane streamed out and was blown by the strong wind to the starboard side. 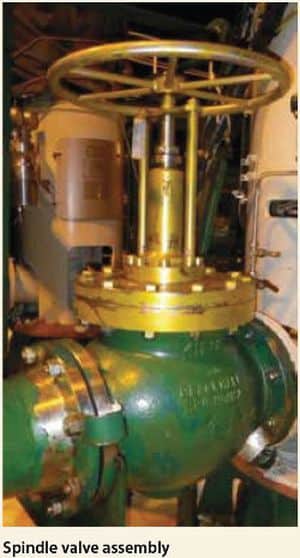 The AB received a significant amount on his upper legs while the cadet received somewhat less on his upper leg and ankle, as did the C/O. He immediately managed to reposition the assembly on the valve body, which stopped the outflow. The AB and the cadet exited the area and received first aid. The vessel was still heading towards the pilot station but as the injuries appeared superficial it was decided not to return for a medical evacuation. Mediport was informed for assistance.

About 48 hours later, while near the arrival port, one victim was heliported to the hospital. He was found to have second degree burns and blisters which required medical care for several days before he was repatriated home.

The excellent company report found, among others, the following:

Chronic repairs: The company had recognised the chronic nature of the valve/spindle assembly problem, as breakdown reports had been already issued and spare parts had been delivered on several occasions. Alternatives to this valve type were being sought, with the intention to replace all six at the next dry docking.

Management of change: On at least six previous occasions similar repairs were covered by a Permit to Work, but not on this occasion. It is likely a Permit to Work would have prevented this accident from happening as it would have been discussed with the Master, who had noticed liquid in the condensate line earlier.

Time and commercial pressure: The oncoming foul weather was the decisive factor in starting the repair soon after leaving port, in order to remove the valve and make use of the time at sea to repair the valve in the engine room (with a blind flange on the cargo line) and to replace it shortly before loading.

Situational awareness: There was no shared mental model on how to proceed. The bosun and one AB were 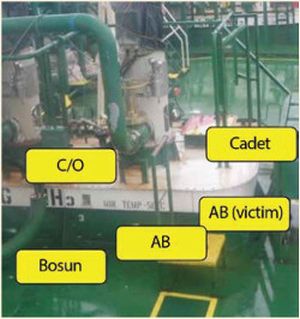 initially involved at the valve with the C/O when another AB and the cadet were called in. At that point, nobody was clearly briefed on what was about to happen. There was no check on whether all participants were clear on their individual tasks and whether the full process and risks were understood (no toolbox meeting).

The C/O wrongly assumed that the cargo in the line had evaporated based on previous experiences with this job. He did not realise that on those occasions the repairs were started eight to ten hours after completing cargo operations, whereas on the day of the accident repairs were started only about two hours later. His preoccupation with completing the job, combined with the fact that he had done the same task a few times before (although with another team) led to risk acceptance and complacency. It also created a mind-set in which the C/O judged it acceptable to bypass standard procedures (ie No Permit to Work).

PPE: The PPE used was not adapted to the risk of frostbite; crew used standard cotton boiler suits over their personal clothing (jeans).