At about 0015, the OOW arrived on the bridge and took the control of the vessel from the Master. The mate was still on the bridge when the OOW arrived, but left the bridge about five minutes later. The OOW maintained the vessel on its designated track, regularly plotting the vessel’s position on the chart. At 0350, as the OOW altered course off a prominent point, he called the mate for the 0400-0800 watch. The mate arrived on the bridge at about 0403 and after reading and signing the Master’s night orders, took over the watch. At about 0408 a course alteration to about 253 degrees was performed. At about 0506 the vessel grounded while still on a heading of 253 degrees.

During the course of the investigation, the mate was adamant that he had not fallen asleep after altering the vessel’s course to 253 degrees. Yet, the sequence of events (see photo) show this as a strong possibility. If not asleep, he must have been doing something other than monitoring the progress of the vessel. 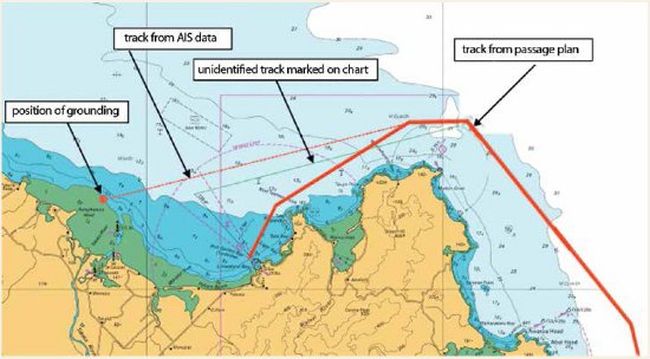 Some of the findings of the official report were: The mate went ashore where he consumed ‘four to five pints of beer’ before returning to the vessel. Even when considering that alcohol affects individuals in different ways, the mate’s performance would likely have been impaired when he was steering the vessel out of port under the Master’s command.

Research has shown that even consuming a small amount of alcohol prior to sleep can affect the quality of sleep leading to daytime fatigue and sleepiness. The mate had only had 3.5 hours’ sleep in the previous 21 hours by the time he went on watch at 0400. The mate did not take enough of the ample opportunity he had to rest before being required for watchkeeping duties.

Editor’s note: In many instances today, commercial pressure and unrealistic vessel manning practices conspire to trap mariners and set them up for fatigue while watchkeeping. This appears not to be the case for this grounding. In this instance, the mariner set himself up for fatigue.