A loaded VLCC was making way eastbound in good visibility in the deepwater route of a busy traffic separation scheme (TSS) (VLCC track shown in yellow on illustration below). The vessel entered the TSS at 2035 hours with the Master, OOW and helmsman on bridge and two lookouts forward. A few minutes later, a westbound capesize bulker was noticed on the VLCC’s radar entering the eastbound lane (bulker’s track shown in red below).

Vessel Traffic Services (VTS) made several calls to the bulker warning that there was a deep laden VLCC tanker in the eastbound lane and they needed to give it a wide berth. Although the bulker acknowledged the warning, there was no change of course. Soon after, the VLCC also called the bulker but received no reply. The VTS intervened and responded that the bulker would keep clear of the VLCC. 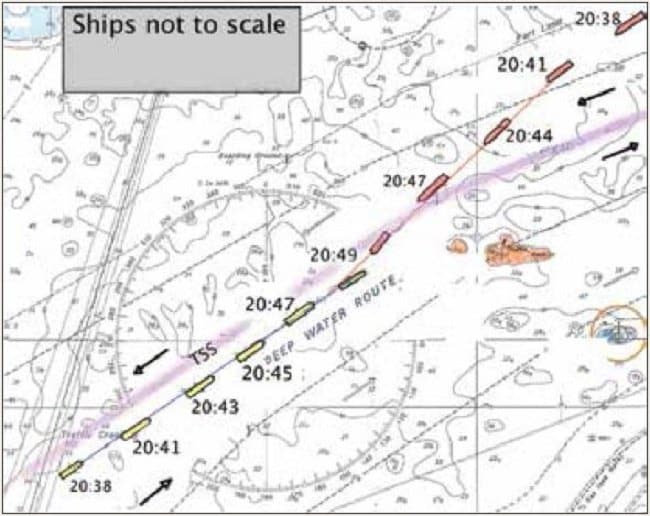 At 2046 the VTS again called the bulker to check if she was altering course. The OOW on the bulker responded confusingly, asking what the intention of the VLCC was and where she was bound. VTS reiterated that the VLCC was eastbound in the deep water lane, and to keep well clear of the vessel. At 2048, when the vessels were about six cables apart, the bulker made a sudden bold alteration to port, bringing it in direct conflict with the VLCC.

The bridge team on the VLCC altered to starboard to bring their vessel parallel to the bulker and reduce the impact. One minute later the bow of the VLCC made contact with bulker’s starboard side in way of the forward cargo holds. Two crew members on the VLCC who were keeping lookout on the bow received serious injury to their legs. The company investigation on the part of the VLCC did not have access to the other side of the story, but nonetheless the following was posited: