The Master of a small coastal trader received instructions from the charterers to load a full cargo of unprocessed incinerator bottom ash (U-IBA). The instructions specified that the cargo was not dangerous, and stated ‘…cargo also includes some foreign materials which is no problem. Cargo can be loaded/discharged in rain.’

The Master and Chief Officer referred to the International Maritime Solid Bulk Cargoes Code (IMSBC Code), but did not find an entry for U-IBA. The Master decided to load as instructed, and did not receive any further information about the cargo. 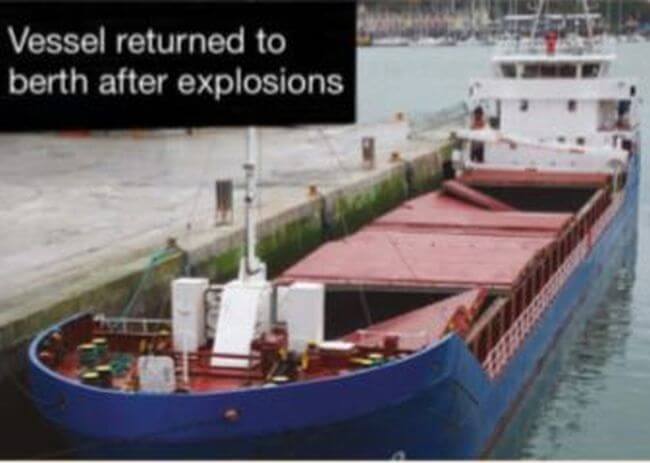 Loading into the single hold took about eight hours, with heavy and persistent rain throughout. When loading was completed, the vessel departed, but anchored 30 minutes later to await better weather conditions for the voyage. The next day, while still at anchor, the chief engineer went to the forecastle store to investigate a problem with the emergency fire pump. He started the pump and from the sound of its operation suspected that it was running dry. After confirming this was the case, he pushed the stop button on the main panel. At the very same moment there were two loud explosions in quick succession and the chief engineer was thrown violently to the deck.

The victim was quickly evacuated by helicopter to a shore hospital. He had suffered first degree burns to his face and second degree burns to his body, hands and lower extremities. The vessel had suffered some minor damage. Five of the nine hatch covers had to be replaced, along with all of the hatch cleats and the cargo hold coaming bar among others.

There had been 34 shipments of U-IBA from the same port on 26 vessels without incident. However, U-IBA was not listed in the IMSBC Code and no steps had been taken to seek approval from the competent authorities for its carriage, as required by the Code. The charterparty stated that U-IBA was non-dangerous and non-IMO classed (implying that it was not a recognised dangerous cargo under the IMDG Code). Therefore, it is not surprising that the Master, along with the Masters of the vessels carrying the previous 34 shipments, followed the loading instructions from the charterer.

The investigation found, among other things, that U-IBA, when exposed to water, generates a low rate of H2, with a risk of explosive atmosphere formation. In this case, H2 gas had probably migrated from the vessel’s hold to the forecastle store and into the pump’s start/stop panel, initiating the first explosion.