A deck crewmember went to the bridge to make a telephone call with the ship’s internet phone. While walking about on the bridge with the cordless phone, he went to the open outer door on the starboard side bridge wing, where he saw a slipper lying on the grating by the lifebuoy release station.

Realizing he had not seen the OOW when he came to the bridge, he concluded something was wrong. He immediately hung up and raised the alarm. The Master and others arrived on the bridge and the general alarm was activated. A Williamson turn was initiated while a search of the vessel was undertaken.

A pan-pan message was transmitted from the ship’s VHF by voice and DSC (distress call). Shortly after, the local coast radio station replied and informed the vessel that the Rescue Coordination Centre would be notified of the situation. Approximately two hours and a half after hours after the victim was reported missing, a helicopter-based rescue swimmer recovered the OOW from the water. 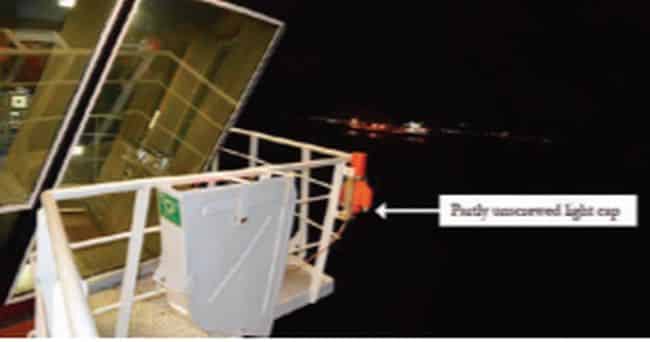 The OOW was already deceased. The investigation determined that the slipper that was found beside the starboard side lifebuoy release station belonged to the OOW. The other slipper was not found. The light cap on the lifebuoy was partly unscrewed. One of the light caps and two O-rings from the port side lifebuoy were found on the chart table on the port side of the bridge. The light bulb was mounted on the smoke signal and showed no sign of being defective. The guard rail at the lifebuoy release station was 103 cm in height with two intermediate bars set at a distance of between 20 and 30 cm below. The buoy was mounted on a steel bracket by the passageway on the outside of the guard rail stanchion, which made it inconvenient to access.

The investigation found that there was no readily available way to check the functioning of the buoy without dismantling it from the bracket. The lack of instructions or guidance from the preventive maintenance system meant that the OOW had to use his own judgement to carry out this task. The OOW presumably decided to inspect the light and smoke signal in place as removing it involved a certain risk of dropping the lifebuoy overboard, particularly when working alone.