The vessel was at sea and some machinery in the engine room was being overhauled by two engineers and an oiler. Meanwhile, a wiper was tasked to pump bilges in close proximity to the overhaul work. The wiper informed the oiler that he was about to pump the bilges. He then opened the floor plate, which was in front of the overhaul work area, in order to manipulate the priming and suction valve of the bilge pump. He left the floor plate open and went to start the bilge pump from the starter panel located a few metres away.

The crew members working on the overhaul task were preoccupied with their tasks and did not realise the floor plate had been left open. The oiler, with both hands on a cover plate that he had just removed, stepped back into the open floor plate. He lost his balance and fell to the deck. He sustained a deep laceration between his left thumb and forefinger due to the fall, exacerbated by the fact that he was not wearing gloves at the time. 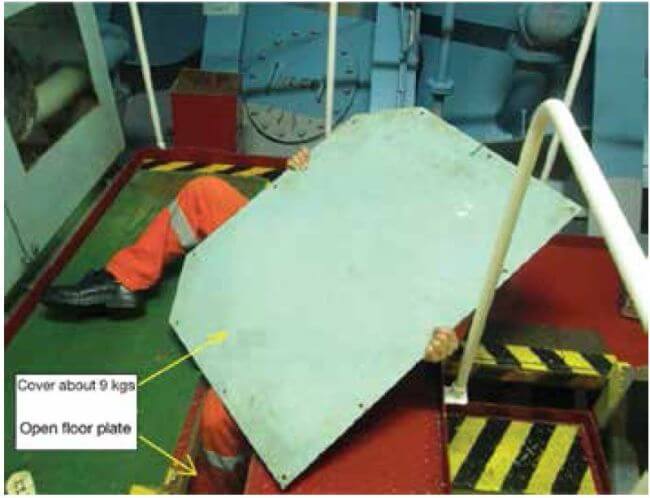 The company investigation found, among other things:

Although a toolbox meeting was held that morning and the jobs to be carried out were discussed, it was not identified that the two tasks were being conducted in close proximity and whether this required precautions to be taken.

The victim was wearing gloves at the start of work. However, he took them off in order to remove the bolts of the cover plate.

There was no supervision; each member of the team was engaged in a task such that no one person had an overview of the area.

When working, be aware of your environment and the environment of others. If you ‘create’ a hazard, ensure barriers or risk mitigation measures are appropriate and have been implemented.

If you remove PPE such as gloves to undertake a specific part of your task, be sure to put them back on at the earliest opportunity.