A vessel was in port and the crew was loading logs on to the hatch covers. The securing system involved the use of foot wires, snatch blocks, and a wiggle wire (see image). Although it was dark, the deck was well lit by the ship’s own floodlights and the floodlights on the wharf.

The crew was wearing personal protective equipment (PPE), which included boot spikes to reduce the risk of slipping on the wet logs. The number one crane was being used to tension the wiggle wire, and two deck crew were standing close by to check the tension in the wire. The bosun was communicating with the crane operator using hand signals.

Tension was brought on the wiggle wire and then stopped at a signal from the bosun. The bosun started to walk towards the two-deck crew in preparation to attach bulldog grips to secure the tensioned wire when a foot wire directly in front of the two-deck crew suddenly parted. 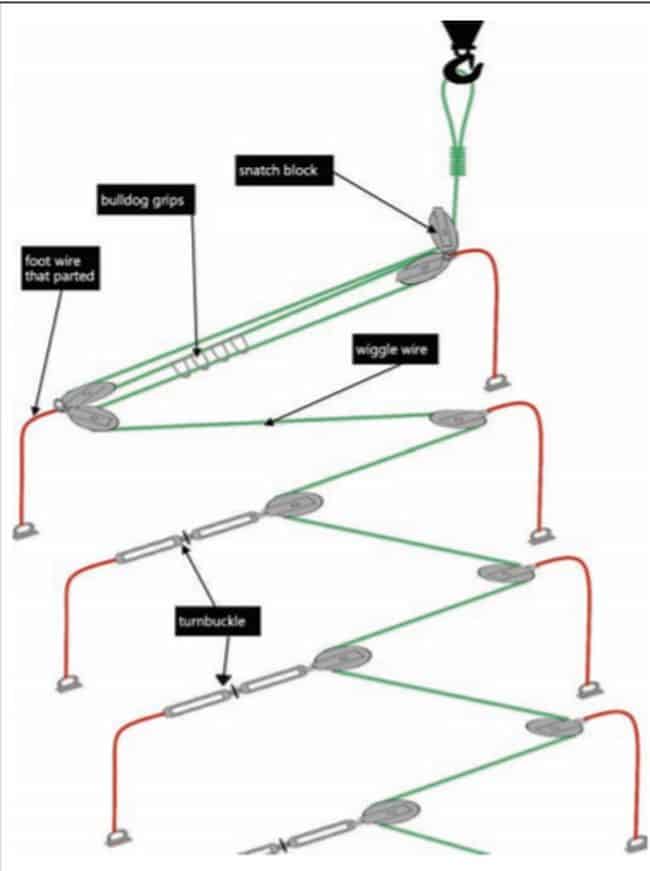 The rapid release of tension allowed a block and the wiggle wire to recoil towards the two-deck crew. Both crews were struck by securing equipment and/or wire; one sustained minor injuries but the other later died of his injuries.

The investigation found that the member of the deck crew, whose role was to monitor the tension, had no way of determining how much tension was in the wire other than by feel, which was done by depressing the wiggle wire with their foot. This improvised procedure led them to stand in a hazardous area close to a wire under tension. As it was, the investigation found that the foot wire parted as a result of over-tension.

According to the vessel’s cargo securing manual, only a nominal initial tension was to be applied to the wiggle wire since turnbuckles were supposed to be rigged between the wiggle wire and foot wires (see diagram in next column), to permit manual re-tensioning when needed. In this case, the crew member had decided not to use turnbuckles but to try to tension the wire fully with the crane.