A cargo vessel was about to depart. The Master held a short briefing with the duty officer and a seaman. He informed them that they would depart without assistance from outside linesmen because the weather was good and the light winds would hold the vessel on the berth.

The deck crew for the departure consisted of an officer and two crew, as was usual on this vessel. Since no outside linesmen had been called, one of the crew was on the dock to let go the lines. No additional crew members were called on deck. The officer went forward and one crew member went aft.

The order was given to release two of the three stern lines. Both aft lines were on the same winch, so the crew member on the poop deck slacked them both at the same time. Once the lines were off the shore bollards he started winching them to the poop deck. 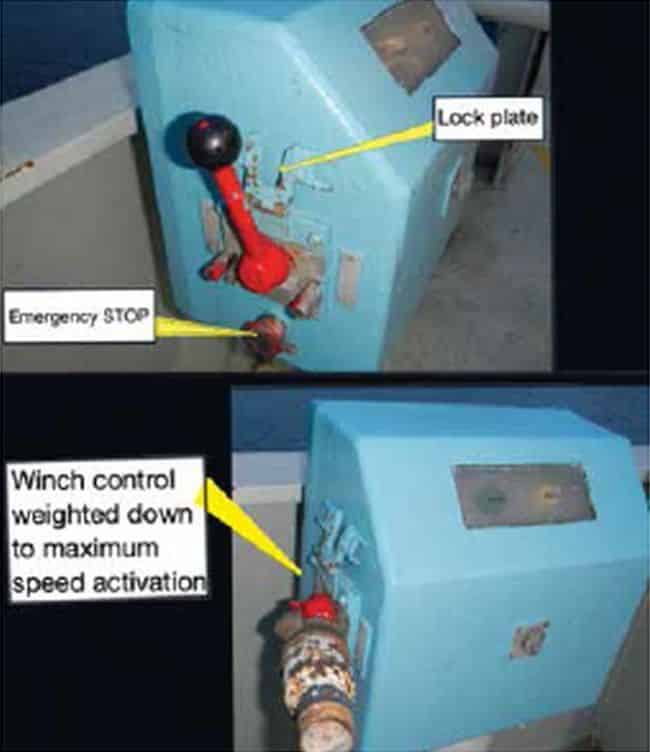 During this time the vessel moved slightly forward, so there was no tension on the aft spring bollard. The crew member on the dock took the aft spring line off the bollard as he went forward. He released the lines at the bow and came back on board just aft of the forecastle.

About this time, the Master noted that the aft spring line was still lying on the quay and had not been winched in. He called the crew member at the stern over VHF radio but received no response. He ordered the third officer to send the recently boarded crew member to the stern to check the situation. The crew member found his colleague pinned to the mooring winch by one of the lines that he had been winching inboard, unresponsive and bleeding heavily from several places. The control lever for the winch was held down by a weight to keep it in the position for maximum winch speed. He immediately called for help and engaged the emergency stop on the winch.

The crew member who found the victim had to cut the mooring rope to free him. By the time the officer arrived the victim had been freed and first aid was administered. Using a stretcher, they moved the victim inside the vessel. An ambulance arrived and the victim was taken to hospital where his condition was stabilised. Unfortunately, due to the serious internal injuries he had sustained, he died two months later.

Real Life Incident: Unsafe Practices Lead To Grounding Of Car Carrier
Want to share your tips and advice? Got questions? Visit the community forum to ask questions, get answers, meet people, and share your tips!