A 9000+ TEU container ship was underway when a fire alarm sounded in cargo hold nine and smoke was seen coming from the hatch in the same area. The general alarm was activated and crew went to their muster stations. The Master reduced the ship’s speed and altered course to direct the smoke away from the deck area.

Approximately 16 minutes after the alarm, a two man team equipped with breathing apparatus (BA) entered the cargo hold to find the location and extent of the fire.

They had difficulty entering and manoeuvring in the hold, struggling with the pressurised fire hoses due to the hose couplings becoming stuck whenever passing a manhole. The firefighters saw no flames and felt no significant heat while searching for the fire. When the air supply was running out after about 20 minutes, they made their way back up without having been able to locate the source of the fire. Once on deck they briefed the second firefighting team. 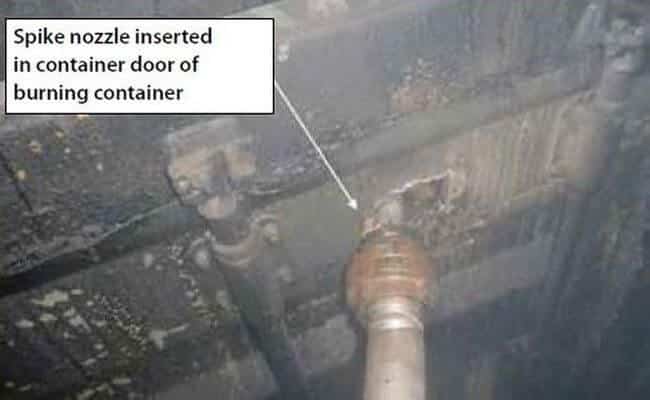 The second firefighting team, also with BA gear, entered the hold to continue the search. They identified a container located between three and four levels down on the starboard side as the probable source of the smoke. At this point, the crew still had no knowledge of the extent and severity of the fire, nor the contents of the containers affected. While the firefighting teams were deployed in the hold, their colleagues on deck had established boundary cooling of the adjacent areas. With the information provided by the firefighting teams, it was decided to deploy the ship’s CO2 extinguishing system.

The first attempt to release CO2 failed due to technical irregularities on the main pipeline. The main distribution valve to the cargo hold was then manually opened, and a second section of CO2 cylinders was discharged, this time successfully. However, the CO2 discharge did not give the required results.

Some time later, a team entered the fire area with the ship’s special ‘container firefighting equipment’; a cordless power drill, a hole saw bit and a spike nozzle. However, the power drill was not able to penetrate the container door. It was decided to close the hold, maintain the cooling, and allow the crew some rest and time to consider alternative approaches. Later, another attempt at placing the spike nozzle in the burning container was successful, this time using an angle grinder to cut the container open. A spike nozzle was inserted and water injected into the container; soon after, the fire was considered under control.

During the second day of the incident, smoke and steam in increasing amounts were again observed coming from the cargo hold. A firefighting team entered to investigate and evaluate the situation. When they returned, they reported elevated temperatures in the containers adjacent to the one which was burning. During the following 12 hours the situation was kept under observation. Another three teams entered the hold during that period to measure temperatures and check the water level in the hold. Based on these evaluations, it was decided to cut holes in the two adjacent containers and flood them with water as well. Since only one special container ‘spike nozzle’ was available and had already been used, the crew inserted standard fire nozzles into the two containers.

As the vessel approached the port of refuge, four days after the initial fire outbreak, a salvage team came on board and was immediately put in charge of the firefighting efforts. Once berthed, the still burning container was discharged.