A relatively small LPG carrier, in ballast, was being manoeuvred under pilotage in port with two tugs secured on the starboard side. The vessel was equipped with twin propellors and rudders.

Once near the berth, the vessel was pivoted to starboard so as to come port side to. Forward speed was now near zero and both tugs were helping execute the manouevre. Due to the moderate north east wind the vessel began to drift astern during the turn. The vessel was drawing 5.3m aft and as the stern came close to the 5m bathymetric line the Master informed the pilot. The pilot did not appear to take any specific avoiding action and the Master did not challenge the pilot further. 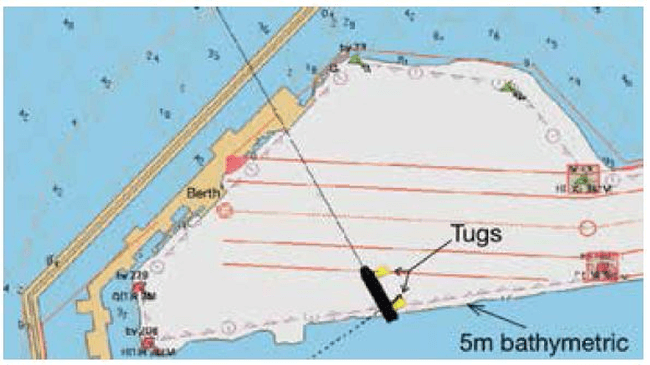 The pivoting manoeuvre was continued, as seen in the diagram, and although the stern swung through water shallower than the aft draft, no impact or vibrations were felt. Within a few minutes the vessel was secured alongside the berth.

Unknown to the Master, pilot and crew, the port side rudder had made contact with the bottom during the pivoting manoeuvre, causing the rudder stock to turn within the steering gear actuator by almost 25 degrees from its midship position. However, the rudder indicators were showing that the rudder was still amidships. This situation was only discovered upon departure when the steering was found to be unreliable and inexplicably unresponsive. The vessel quickly went to anchor and divers soon confirmed that the rudder was misaligned, although the rudder itself was physically undamaged.