A general cargo ship was in port loading timber packs, machinery and containers. Once the holds were loaded with the timber pack cargo, the stevedores loaded machinery on the main deck. Finally, dangerous goods containers were loaded on top of number four hatch cover. The deck cargo was then lashed securely for the sea.

About 90 minutes later the number four cargo hold smoke detection alarm sounded throughout the crew accommodation. When the access hatch to number four cargo hold was lifted a burning smell was detected. The general alarm was activated to summon any crew who had not already mustered on first hearing the smoke alarm.

The ship’s crew began to prepare the firefighting equipment and the reteam returned to the access hatch and prepared to enter number four cargo hold. This time when the access hatch was opened, smoke could clearly be seen coming from the cargo hold. The first fire team entered the cargo hold with the intention of locating and fighting the fire. They soon found that their access was blocked by containers and that visibility was limited due to heavy smoke, so they exited.

The port authorities were advised and assistance from the local fire service was requested. Once all crew members were accounted for and the cargo hold sealed, 48 bottles of CO2 were released into the hold. Boundary cooling now took place and the temperature on the bulkheads of number four cargo hold was monitored. Sometime later it was decided to release the remaining 24 bottles of CO2 into the hold and discharge the dangerous goods containers on the hatch.

About four hours later the incident management team, made up of vessel and shore personnel, agreed to open the hold. No smoke was present in the hold and the fire appeared to have been extinguished. Some of the findings of the official report were: 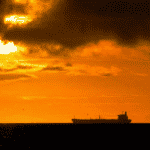