The Chief Engineer planned some repairs of minor water and vapour leaks near the turbo pumps of the feed water circuit while the vessel was at anchor. The pump system consists of an expansion bellows, a suction valve, the pump itself and a discharge valve with non-return function.

There was no specific procedure for this work. Nonetheless, around 09.00 three engineers and two oilers under the supervision of the Chief Engineer started closing valves and opening drains. On turbo pump 2, the delivery valve was closed first by one of the oilers. Then the recirculation valve was closed. At 09.20, one of the engineers was standing on a ladder closing the suction valve when the expansion bellows ruptured. Hot water gushed over an engineer standing on the deck and to a lesser extent over the engineer on the ladder who had closed the valve. One of the oilers also received hot water on his ankles. All crew members were wearing full PPE, including helmets. 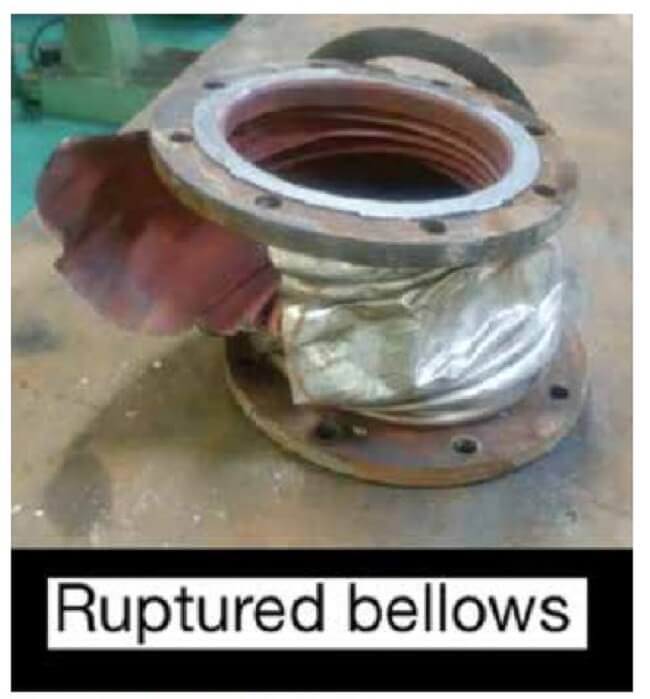 The company investigation found that the rupture of the expansion bellows was caused by an overpressure in the pump system between the suction valve and the delivery valve. This overpressure was caused by a leak in the delivery valve; once the suction valve and recirculation valve were both closed the pressure quickly increased above the design pressure of the bellows, which is the weakest part of the system.

Normally the drain valves (and vent) must initially be cracked open to release the water and to provide confirmation that there is no pressure present in the system. In this case it was determined that the drain valves were probably left closed before the work started.

Findings of the company investigation

Performing this type of work with only ‘one-valve segregation’ appears to be a common working method, unchallenged throughout the industry. It is clear that this goes against the safety hierarchy of:

The design of the vessels means that using double valve segregation is often impossible for this kind of maintenance. Shutting down boilers is a time-consuming operation, which is not always supported due to commercial commitments or operational consequences such as cargo control. This is a topic that needs to be addressed industry-wide (for example, through SIGTTO).

According to the company investigation, the leadership style of the Chief Engineer probably contributed to the accident. He was directly involved in the work, giving short instructions rather than guidelines; he did not ensure closed-loop communication at every step. For example, one of the engineers thought that the Chief Engineer had opened the drains, but he was not certain. The crucial opening of the drains was left to assumption instead of positive confirmation.

The company also found the Chief Engineer’s safety awareness (and leadership) to be below standard. Among other things, there was no toolbox meeting or similar preparation just before the job began. A risk assessment of the work was created about 40 minutes after the accident had occurred.

To the Chief Engineer’s credit, his insistence on the use of full PPE, and helmets in particular, largely contributed to reduction of consequences to the engineer whose head and face were exposed to the hot water.

Instead of working in an ad hoc manner based on the experience of the particular persons on site, procedures should always be developed, and followed, for any work that involves risks that are not acceptable. Procedures should bring risks to the level of as low as reasonably practicable (ALARP).