In the early evening, the crew of a chemical tanker in ballast was preparing for departure. The pilot advised the Master that he intended to use a mooring launch/tug to assist in maneuvering the vessel’s stern off the berth, given the 25-knot wind pushing the vessel on to the berth. Additionally, Mere was an obstruction astern and another vessel was berthed 30m ahead of the tanker.

The mooring launch made a line fast through the tanker’s starboard quarter fairlead. The pilot ordered the launch coxswain to make a light line’ while the Master made the engine and bow thruster movements necessary to clear the berth using the forward spring. The tanker began to move off the berth and the Master brought the controllable-pitch propeller (CPP) to zero. The forward spring was then let go, and the order ‘all easy’ was passed by the pilot and acknowledged by the launch coxswain. The Master moved the CPP control ahead and the tanker’s speed increased to 2-4kt. 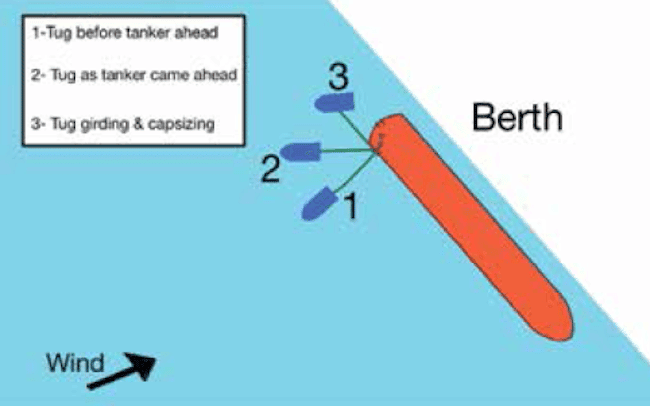 Meanwhile, the mooring launch coxswain attempted to turn the launch to port but found he could not. The pilot ordered the launch to ‘run with me’ and then to ‘come in and let go’. These orders were acknowledged by the coxswain even though he was experiencing difficulty in maneuvering.

A crew member at the tanker’s stern overheard the pilot’s order for the launch to let go on the VHF radio and waved the launch in. He immediately noticed that the launch appeared unable to respond and was listing to port. He instructed the bridge team by VHF radio to stop engines but received no response. On board the launch, the coxswain attempted to operate the emergency release. This was unsuccessful. The deckhand left the wheelhouse and attempted to release the towing hook by pulling directly on the emergency release wire. This was also unsuccessful. The tanker’s crew member aft repeated his instruction to the bridge team to stop the engine. The Master then asked for clarification and,
on receiving it, brought the CPP control to zero.

In the following minutes, the launch listed further to port and capsized, with the towline remaining attached to the tanker. The tanker’s Master released a man-overboard lifebuoy and marker. At the same time, the pilot made a series of emergency calls on VHF radio, following which a search and rescue (SAR) operation was initiated.

The deckhand was able to swim clear of the launch as it capsized and was rescued, but the coxswain remained trapped in the wheelhouse. The launch remained inverted for over an hour with the coxswain trapped inside but still alive. He was finally rescued when the launch partially rolled on its side. The coxswain and deckhand were treated for shock and hypothermia.

Some of the analysis and findings of the official report were as follows: