A car/truck carrier, loaded with new and used vehicles, was underway at sea when the fire alarm sounded in the cargo compartment on deck 1 (the lowest deck). Following this, fire detectors on other decks also sounded.

The crew mustered and a team was sent to investigate. Personnel on the bridge tried to assess the situation using a surveillance camera on deck 4, but nothing out of the ordinary could be observed.

The search team reported that thick black smoke could be seen further astern on deck 1. No MAYDAY or PAN-PAN call was made and nearby vessels were not contacted. 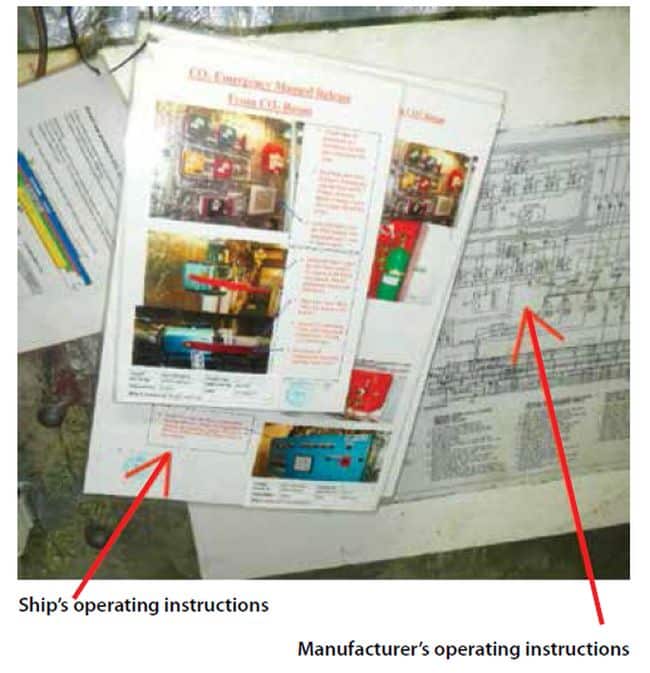 It was decided to use the CO2 fire suppression system to combat the fire. Once it was confirmed that all crew were accounted for, the chief engineer initiated the extinguishing system. However, because there were two different versions of the activation procedure posted – one from the manufacturer, one from the ship – he found the instructions unclear. After about five minutes, he was finally able to activate the system, some 26 minutes since the fire alarm had first sounded.

Soon afterward, smoke was seen coming out of one of the ventilators on the upper deck. The ventilator’s fire dampers should have closed automatically when the fire alarm or the fire suppression system was activated, but one damper remained open. It was quickly closed manually. An inspection the following day revealed that the fire had been extinguished but had caused major structural damage.

Case Study: One Small Step For Crew Member Results In Injury
Want to share your tips and advice? Got questions? Visit the community forum to ask questions, get answers, meet people, and share your tips!