A chemical tanker had arrived at the terminal. While in port, it was planned to launch and manoeuvre the rescue boat as part of a series of emergency exercises. The drill began with crew rigging the embarkation ladder from the rescue boat stowage deck. The rescue boat was lowered without personnel. The crew then used the ladder to climb down to the boat and unlock the hook. 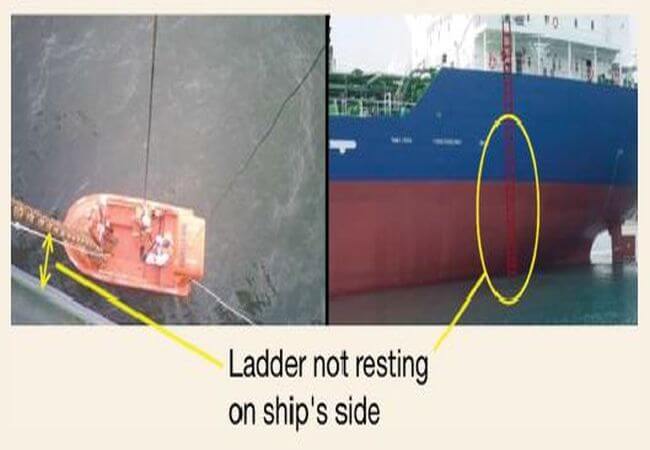 After executing some manoeuvres on the water, the boat crew returned to the retrieval hook and made the connection. Three crew successfully climbed back up the embarkation ladder. As the fourth crew member was climbing, he suddenly felt exhausted and fell back into the water from a height of some 4 metres, hitting his back on the rescue boat. He was quickly recovered and first aid was administered. The victim was later taken to hospital ashore. He was declared unfit for sea service due to a back injury and was subsequently repatriated.

The company investigation revealed that the embarkation ladder does not rest firmly against the ship’s side when rigged at the boat station, due to the flare of the stern. Climbing up a hanging ladder is very difficult and requires much strength and stamina.

When using a boarding ladder or pilot ladder, ensure it is properly installed and that it is resting against the ship’s hull.