After discharging cargo of gasoline and fuel oil at Sydney, Nova Scotia, the tanker proceeded in ballast towards the next port of loading. The cargo tanks were left in an ‘over-rich’ condition. During the voyage, the work of venting the cargo tanks began, starting with No. 1 (P and S), which had contained gasoline. There were no written procedures on board for venting, so the deck crew had to rely on verbal instructions from the 1st officer to understand how to perform their task.

Both deck crew had previous experience performing these venting operations under supervision, which had been without incident. In preparation for venting operations, the deck crew laid out flexible hoses beside the tank cleaning hatches and manually opened the tanks’ pressure/vacuum (PV) valves. They removed the tank-drying flange covers and hooked one end of the flexible hoses to the tank-drying system. The other ends of the flexible hoses were inserted through the tank-cleaning hatches close to the bottom of the tanks. The fixed tank-drying system was designed and approved to supply relatively low volumes of ambient air to dry tanks following washing and ventilating. The system was not approved for the ventilation of tanks containing explosive atmospheres, yet this is how it was used on this vessel. 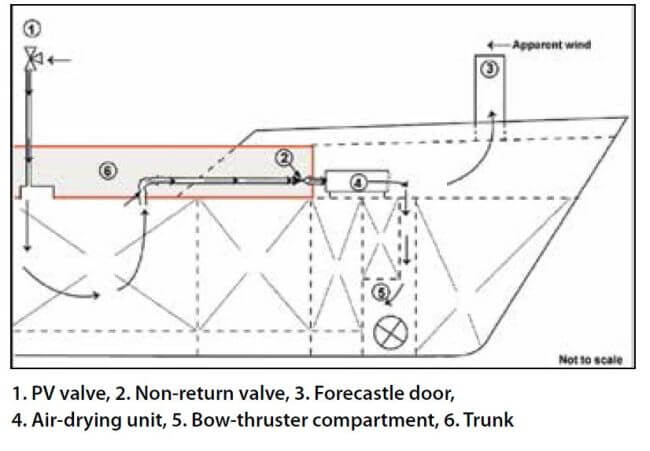 After seeing to pilot boarding, the 1st officer was informed by the deck crew that the flexible hoses had been inserted into the number one tanks and that they were now ready for venting. As the tank-drying fan was not yet running and because he had previous experience with vapour migrating through these hoses into the forecastle, the 1st officer removed the hoses from the tanks and closed the tank-cleaning hatches. He then went to the forecastle, but before reaching the door, he smelled gasoline vapour. He left the door open to ventilate the forecastle area, but did not start the bow thruster ventilation fan in case it might cause a spark.

The 1st officer informed the bridge of the forecastle atmosphere and instructed the next watch to stay clear. The forecastle was naturally ventilated for the next hour and 40 minutes. Later, the 1st officer returned to the forecastle and verified the atmosphere with a gas indicator. The reading was at 0 LEL. He then proceeded to the trunk space to verify the valve settings on other tanks. Shortly thereafter, an explosion occurred in the bow thruster compartment that was just below the forecastle. Only minor damage was sustained.

Some of the official findings as to causes and contributing factors were:

Real Life Incident: On The Bridge But Not On The Job Leads To Collision
Want to share your tips and advice? Got questions? Visit the community forum to ask questions, get answers, meet people, and share your tips!