A tug was about to depart a berth that it often used. One crew member was on the dock to let go the lines. He was wearing a full set of personal protective equipment (PPE), including an auto-inflating lifejacket with a personal locator beacon (PLB) and crotch strap, which was fastened.

Once the lines had been let go aft, he went forward and released them. He then walked back towards the tug’s bulwark gate, which was now aligned with the centre of a berth fender. The over-rider was damaged, and as he stepped over it and lowered himself onto the top of the fender, he fell into the water.

His lifejacket immediately inflated and he started to drift clear of the berth and tug with the tidal current. The tug’s Master immediately moved the tug away from the berth and alerted local VTS of the accident. The victim was floating on his back about five metres off the tug’s port bow with his head out of the water. Another crew member tried to throw him a rope, but the wind blew it back on board. A lifebuoy with a lifeline attached was thrown. 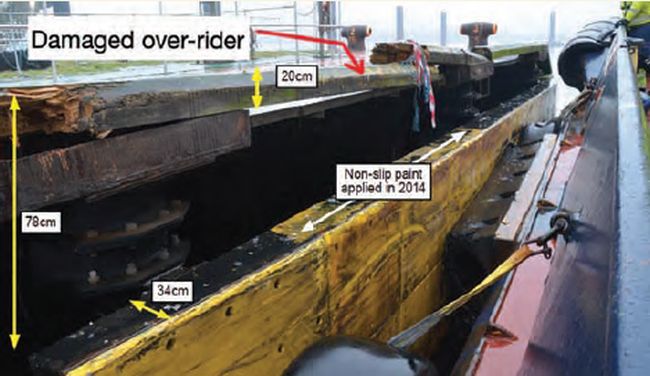 After several attempts, it landed close to the victim, who put an arm through it. The two crewmen then used the attached line to pull the victim to the foot of the tug’s port side rescue ladder and gate, which were located approximately midships. He had now been in the water for about five minutes and was able to hold on to the recessed ladder, but he was unable to climb up. The water was rough, with waves up to 2.5 metres high and a temperature of 4°C.

The crew attempted to use the man overboard (MOB) rescue sling. Although they managed to pull the victim out of the water as far as his waist they were unable to lift him further. Now, a crewman climbed down to the first rung of the ladder and held the victim with one hand. However, he was unable to sustain this position and climbed back on deck.

Both crewmen held on to the pole of the rescue sling with its eye under the casualty’s arms. The victim was conscious and groaning, but did not speak. About five minutes later (he had now been 10 minutes in the water), he went limp and slipped from the eye of the rescue sling. The crew then went to the starboard side of the tug to prepare the tug’s ‘Jason’s Cradle’ (water recovery device) but before they could fully rig the cradle a harbour rescue boat arrived and recovered the victim.

As the victim displayed no signs of life, cardio-pulmonary resuscitation was undertaken as the rescue boat was taken to rendezvous with an ambulance. The victim was declared deceased on arrival at the hospital. The postmortem examination showed that the cause of death wacardiac arrest due to cold water immersion. Some of the findings of the official report were: