A bulk carrier was down-bound in a river waterway. While the vessel was in a lock, there was a change of pilots. During the exchange, the disembarking pilot mentioned that it was difficult to communicate with the bridge crew because of their lack of proficiency in English.

After the arriving pilot had exchanged information with the Master, the vessel left the lock. The pilot requested the assistance of a police patrol boat from vessel traffic services (VTS) in order to clear any pleasure craft in the area below the lock exit, as many small boats were present for a fireworks show. As they progressed downriver, the Master left the bridge. The bridge team now consisted of the pilot, the officer of the watch (OOW) and the helmsman. 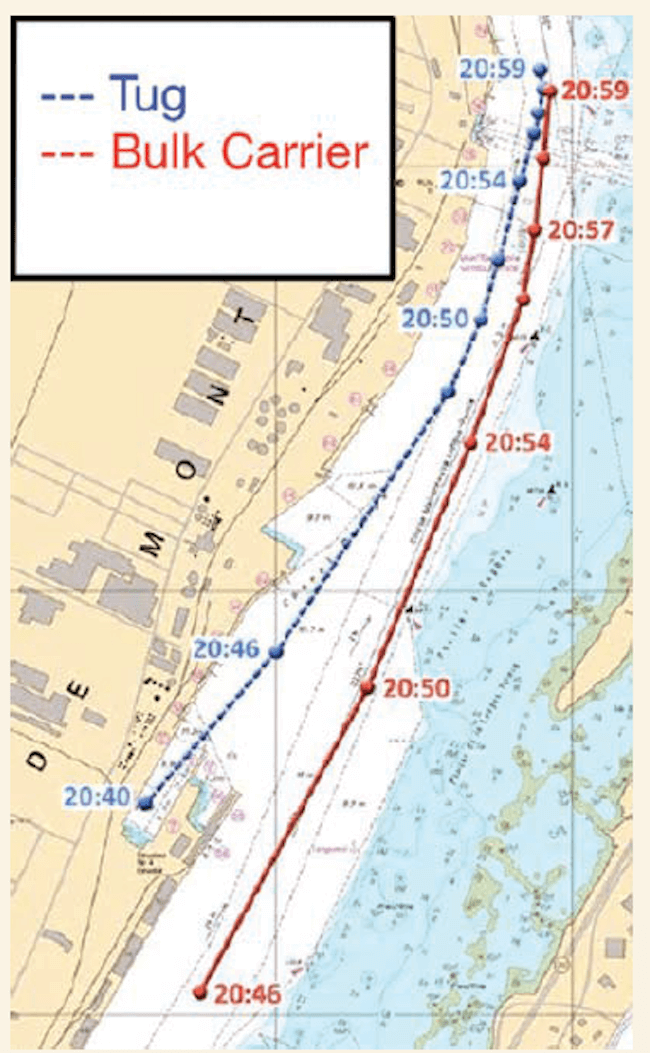 At about the same time, a port tug left its berth down-bound to assist another vessel. VTS granted authorisation for the tug and gave information on up-bound vessel traffic, but did not mention the downbound bulk carrier exiting the lock.

As visibility was good, the tug Master navigated visually and did not turn on the radar. The ECS was not used either. The bulk carrier, now making way at a speed near 12 knots, was upstream and behind the tug at a distance of approximately 0.9nm. The tug was visible to the pilot.

On the bulk carrier the pilot asked the OOW to turn on the forward deck lights to make the vessel more visible to the pleasure craft and to have someone posted forward on the forecastle deck to stand by at the anchors. The OOW appeared not to understand; at any rate the requests were not acted on. The pilot asked for the Master to come to the bridge. When the Master arrived, the pilot again requested that the forward deck lights be turned on. The Master turned on the lights.

The pilot, now on the port side of the bridge, observed three pleasure craft ahead of the bulk carrier moving towards the vessel. Two of them altered course to starboard in order to meet port to port. The third altered its course to port; in doing so, it disappeared from sight behind the bulk carrier’s cranes. The pilot went to the starboard side of the bridge in an attempt to see the third pleasure craft but then lost sight of the tug. Not being able to see the pleasure craft, the pilot altered to port.

When the pleasure craft became visible on the starboard side, the pilot ordered starboard 20° and then hard to starboard. Once the swing of the vessel was stopped, the pilot ordered that the vessel be kept steady at 357°. By this time the tug was less than 100m away on the port side, and the pilot was on the starboard side of the bridge – still without a view of the tug. As the pilot walked back to the port side of the bridge, there was a screeching sound. The pilot now saw the tug on the port bow moving away from the bulk carrier. The Master on the tug had, at the last minute, become aware of the bulk carrier behind him and had engaged both engines in order to move away from the approaching vessel.

Following the collision, the tug’s engineer checked for water ingress. The pilot on the bulk carrier and the Master on the tug spoke over VHF radio and confirmed that they had collided and VTS was informed.

The damage sustained by the tug was sufficient to merit a dry dock and it was out of service for almost seven weeks. The bulk carrier was not damaged, but traces of black rubber from the tug’s fenders were apparent on the hull.

The Master on the tug was unaware of the bulk carrier for a variety of reasons: