A partially loaded tanker was underway at about 12 knots in a safety fairway. An OOW and lookout were on duty and the helm was on
autopilot. Daylight was beginning to fade but night had not yet fallen.

Ahead and to port the two bridge team members saw a fishing boat coming in their direction. Both believed, from visual observations, that it would pass astern. The Master and the second mate were also on the bridge but were working on ship’s business on computers.

At one point the chief engineer came to the bridge to talk to the Master. As he looked out of the window he saw the fishing vessel at
very close range. 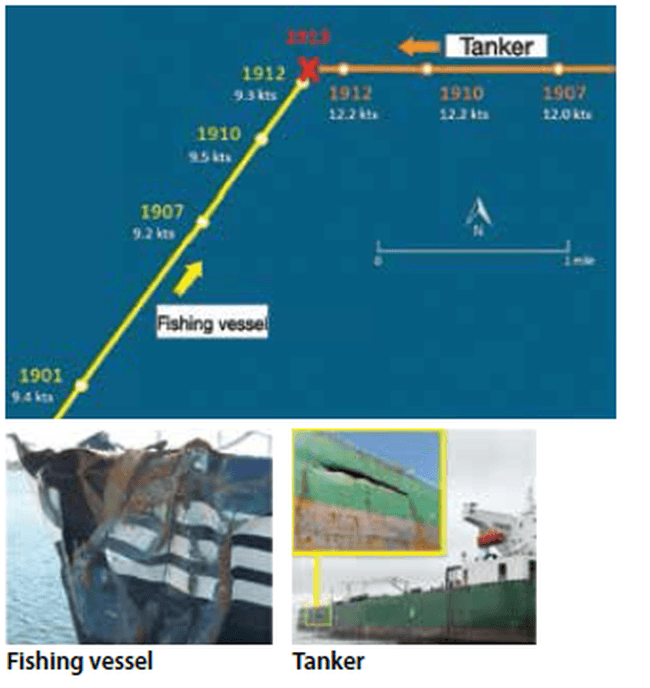 His exclamation caught the Master’s attention and the Master left the work station to see the fishing vessel for himself. He immediately ordered hand steering and starboard helm as well as the sounding of the ship’s whistle.

Meanwhile on the fishing boat, the lone watchkeeper had been cleaning when he heard a metallic sound, which turned out to be the first contact of the fishing vessel’s outriggers with the side of the tanker. He tried to turn the vessel but it was too late and it made heavy contact
with the tanker.

OOW Under Alcohol Influence, Ship Runs Aground At Full Speed
Want to share your tips and advice? Got questions? Visit the community forum to ask questions, get answers, meet people, and share your tips!